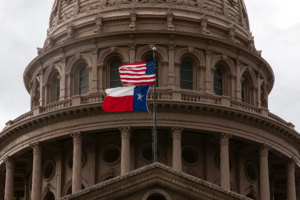 The Texas House of Representatives advanced a GOP-backed election bill Thursday restricting voting and imposing penalties after months of Democratic opposition and a 12 hour debate.

The bill was approved 79-37 along party lines with the exception of Rep. Kyle Larson, who voted no. The vote brings the significant changes Republicans want to enact to the Texas’ elections one step closer to reality.

With the vote, the bill now moves to the state Senate, which can concur with changes the Texas House made or send it to a conference committee to reconcile the two bills.

The debate over the bill quickly became heated when Speaker Dade Phelan asked members not to use the word racism while debating the bill, despite the fact the bill literally restricts voting to make it easier for Republicans to win in the state.

During the 12 hour debate, Republicans blocked a litany of Democratic amendments including to allow same-day and automatic voter registration, allowing students to use their college IDs to vote, creating special voting conditions for people with disabilities and requiring racial impact studies on the changes to voting laws.

Many of the changes in the bill are directed at Harris County, Texas’ most populous county and where Houston, a Democratic stronghold is located. The new restrictions prohibit local election officials from sending unsolicited mail-by-vote applications, including to residents 65 and older who are automatically eligible to cast a mail-in ballot. The bill also places new restrictions around mail-in voting and those who help voters, including voters with disabilities, to cast ballots.

Republican authors say the bill is designed to make it “easier to vote, harder to cheat,” however, opponents of the bill say disproportionately place new burdens on marginalized groups and limit measures that were popular among minority voters during the pandemic including allowing shift workers who cast ballots after hours.

Texas Democrats tried several moves to stop the bill from being advanced, including abandoning the state earlier this summer. Additionally, Sen. Carol Alvarado of Houston filibustered for 15 hours, without being able to take bathroom breaks or drink water.