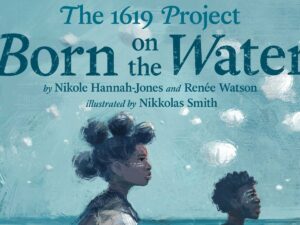 In addition to a highly anticipated anthology of essays, poems and short stories, Nikole Hannah-Jones‘ award winning “The 1619 Project” has been adapted as a children’s book called Born On The Water.

The picture book is a collaboration between Hannah-Jones, Renée Watson, and illustrator Nikkolas Smith, and came about after readers of the original New York Times Magazine version requested something that could be more easily shared with young readers, the Associated Press reports. Using images and poetry verses, Born On The Water follows the history of African Americans from their ancestral origins in thriving African communities to the middle passage and enslavement and the battle for freedom.

“It honors what children are able to wrestle with and grapple with, and I think so many books written for children underestimate what they’re capable of,” says Chicago teacher Jess Lifshitz, who shared that until she received a copy of the children’s book, she wasn’t sure if she would incorporate “The 1619 Project” into her 3rd grade classroom.

“With all the tension that is swirling around adults, sometimes it’s hard to remember what a beautiful picture book that tells an accurate story about history can do for the kids sitting in the room,” she adds.

Hannah-Jones’ original work, which was also adapted into a podcast, earner her Pulitzer Prize for commentary. But it has also been at the center of the controversy around critical race theory in education.

The project inspired legislation in several states that seeks to remove “immoral or unpatriotic” books from school libraries across the country. In Texas, two similar bills were passed that both mention “The 1619 Project.”

Ahead of this week’s release of The 1619 Project book, online retailer Bookshop.org is working with the book’s publishing house, One World, to allow independent stores to donate copies of the book to schools, libraries and other literacy organizations. One such store, Reverie Books in Austin, Tx. is participating in the initiative.

“My store is a social-justice oriented bookstore, and this book fits very well within that mission,” explains Reverie owner Thais Perkins. “I am promoting community sponsorships of the book, where people can purchase a copy and have it donated to one of the schools.”

In many school districts where there are rules preventing “The 1619 Project” from being taught, these community sponsorships will ensure that parents and children who are interested in reading the book can still access it through their school libraries.