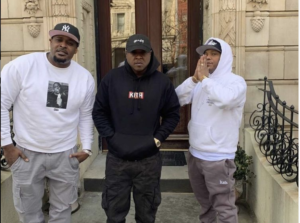 The Lox are having the best week ever after their undisputed win against Dipset during the Verzuz on August 3 and being honored by the city of Yonkers.

The New York-based rap ensemble comprised of Jadakiss, Sheek Louch and Styles P were presented with keys to the city on August 6.

Styles P took to Instagram to show his appreciation for the gracious honor.

“We just want to say thank you,” he said. “Love is love. To the people of Yonkers, the mayor of Yonkers, we will be receiving the key to the city. Super dope, love is love.”

The talented rapper also announced Jadakiss, Sheek Louch and his continuing work in the city to make improvements for its residents.

“Even doper than that, we’re opening up a revised third park, a third workout station in Yonkers for people, kids, grownups, women and children to have family activities and keep focusing on your health,” he said.

“Make our city a better place to live. It’s an easier way for the kids. You don’t have to get a felony, get in trouble, just work out and be healthy, and try to go the right way. That’s what we’re here for. Yonkers strong!”

The presentation was also a part of the city of Yonker’s reveal of a renovated park and the installation of new fitness equipment.

Styles P captioned the honor as well. On IG, he showed the group’s gratitude for being recognized.

“@cityofyonkers @mayormikespano we are honored, humbled and appreciative to have the keys to the city,” Styles wrote on Instagram. “@sheeklouch @jadakiss @juicesforlife @farmacyforlife and myself will keep in mind and always remember the people are the true keys to the city! We will do what’s necessary to make it a healthier, safer, vibrant city for those coming after us…and will push to make it happen in other cities as well.”

2021 appears to be The Lox’s year. The trio will also embark on a  two-week tour with   Dipset starting September 16.

Crypto community in shock over Brian Brooks’ resignation from Binance.US