Tar-coated wooden shingles cover the walls and roof of this small cabin, which architecture office Pirinen & Salo designed as a studio for a filmmaker on a wooded site beside lake Porovesi in Finland.

Helsinki-based practice Pirinen & Salo drew on the “mystical” worlds of 1980s adventure films for the design of The Filmmaker’s Hut, which it describes as a “shrine to cinema”.

Positioned on a gentle slope alongside the ruined foundations of an old stone building, the 15-square-metre studio is accessed via a wooden walkway that runs along the lake’s shoreline.

To create a sense of mystery and escapism, the architect wanted both the age and size of The Filmmaker’s Hut to be hard to intuit and so created a play in scale between the oversized gable-roof form, arched window and small wooden shingles.

“The path acts as a transition from the mundane to the dream world of creative work,” described the studio.

“The exterior of the small hut is a delusion. It’s made to appear much larger than its physical size. This, in turn, makes the surrounding nature and landscape appear colossal.”

A black wooden staircase leads from the stone foundations up inside the cabin and directly into the workspace – a double-height barrel-vaulted room lined with dark oak panelling.

On either side of the space are built-in desks and storage units made from contrasting pale oak. These units incorporate a bookshelf, sound system and an integrated leather sofa, as well as a black cast iron fireplace. 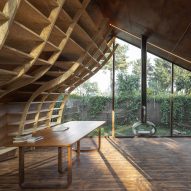 Using the language of church architecture, the practice describes the centre of the structure as the “nave” and its desks as the “side aisles”, while posters of the client’s favourite films act as “the saints”.

“The side aisles are for working while the main nave has enough height and air for ideas, dreams and imagination,” explained the architecture studio.

“All the technical appliances that might give away the actual age of the hut are carefully hidden away to make the building appear ageless.”

At the rear of The Filmmaker’s Hut sits a bathroom and technical store.

A wooden ladder leads up to a small mezzanine that is designed for “catching ideas and daydreaming” while looking out into the forest through a porthole window.

The Covid-19 pandemic has led to a renewed interest in spaces that separate work and home life in the absence of shared offices.

In Aarhus, Danish practice Sleth recently completed a copper-clad cabin workspace for an author, which focuses on creating a connection to its natural, wooded site. Elsewhere, Finnish practice Studio Puisto designed an adaptable, prefabricated cabin to offer people who have been forced to spend more time at home during the pandemic a space to work or unwind.

The photography is by Marc Goodwin.

Pokémon's Diamond & Pearl Remakes Aren't Out Until Nov 19th, But Some Seem To Already Be Playing Them