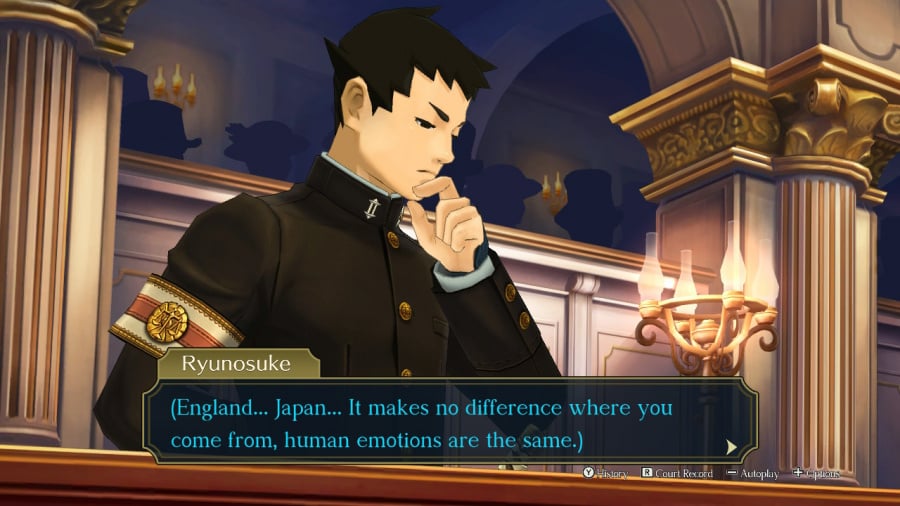 The last time we saw Phoenix Wright and friends, the stars of the Ace Attorney franchise, they were in a made-up country called Khura’in. Spirit of Justice came out for 3DS in 2016, and was relatively divisive — a lot of critics ranked it highly, but others found issue with its “wishy-washy” mechanics and its heavy reliance on made-up mysticism. It also marked a fairly big change in the Ace Attorney games: though they’ve always been quite coy about where they’re set, they’ve never really left the United States (or Japan, if you’re a purist) — at least, until Spirit of Justice, where significant chunks of the story are set in a fictional country.

The Great Ace Attorney Chronicles, as many fans will already know, is set in Meiji-era Japan and Victorian England, making it it almost the exact opposite of Spirit of Justice: instead of being made-up, it’s firmly rooted in historical fact and steeped in the vernacular of the time. It can be quite jarring to go from the often light-hearted, goofy fictional world of Phoenix Wright (the man who adopted a daughter out of nowhere, and has a sidekick who can read emotions with a magical bracelet) to the weirdly real world of Wright’s ancestor, Ryunosuke Naruhodo — not least because the latter is also very, very Japanese. 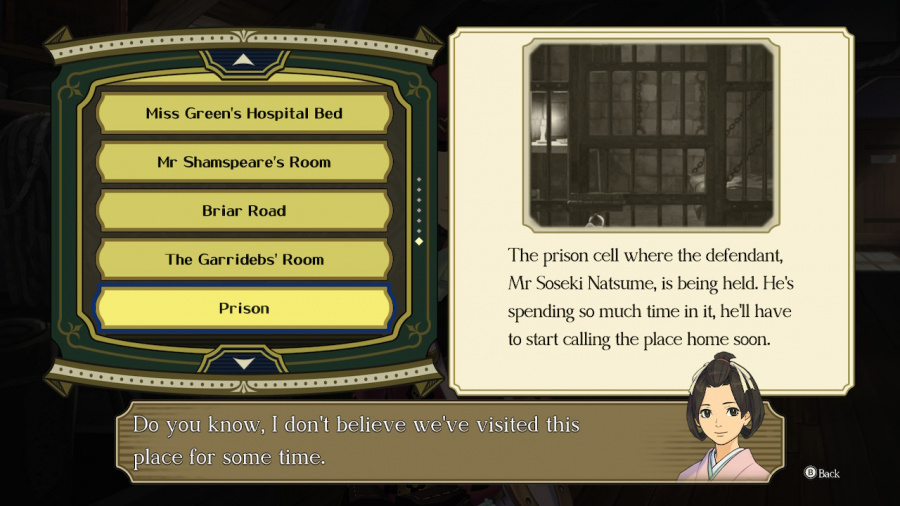 The Great Ace Attorney relies so much on Japanese culture, language, and history that it can at times feel alienating, even though it would be ludicrous to ask a Japanese game made by Japanese writers to tone it down. It’s no one’s fault, and it’s no one’s problem to fix; it just is what it is. The localisation is fantastic, and does a great job of explaining things as you go, whether it’s the writings of Soseki Natsume (a very famous Japanese novelist who used to be on the 1000-yen note) or a play on words that requires knowledge of the intricacies of the Japanese language, but even with all that, it does occasionally feel like a very kind friend is explaining an inside joke to you; you end up with all the context, but you’re still not really in on the joke.

There’s still so much to enjoy about the writing anyway that it’s not really an issue for most of the time. You can tell, even without speaking Japanese, the amount of thought, care, and research that went into the text. Characters from smoggy old London feel genuinely British: world-weary, cynical, utterly tired of the cold and the fog, and if you take a drink every time someone mentions tea you’ll have liver failure in a matter of minutes.

In contrast, the Japanese characters seem nervous, wide-eyed, and overly-polite; it’s all part of their characters, of course, especially in a foreign and not particularly welcoming country, not to mention the overt racism they’re faced with, like jury members instantly distrusting them because of their provenance, or one particular prosecutor that’s constantly throwing nasty barbs at them based on their ethnicity. 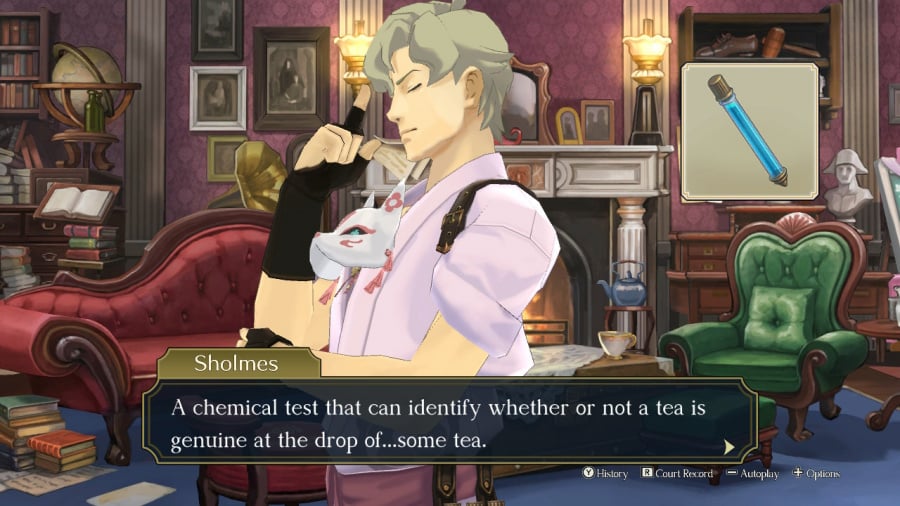 Almost everything else about the game is similarly brilliant. The backgrounds are stunningly detailed, and it’s almost a shame that only a very small amount of it can be examined for unique dialogue. Likewise, the level of quality in the detailed animations and characterful personas is almost too emotional for a long-time fan to bear, because it shows how far the series has come, and how much respect and admiration it’s gained in the 20 years since it first came out. It’s truly incredible to see characters interacting with each other, from gentle prods with an umbrella to a maid pouring tea over her master’s lap as a passive-aggressive way to tell him to shut up.

The character interactions are the heart of The Great Ace Attorney, because the new gimmicks — every Ace Attorney adds at least one — largely involve people interacting with other people. In the court-based portions of the game, multiple witnesses can appear at once, and part of the methods you’ll use to defend your client will involve how the witnesses react to someone else’s testimony.

Then, there’s the jury, which is pulled from the real-life British legal system, despite a lot of Ace Attorney-style weirdness added in (people directly involved with the case can be on the jury, for example). The jury can declare their verdict at any point, and if they all decide your client is guilty, then you have to claw back their support (or their indifference, at least) by pitting their opinions against one another. 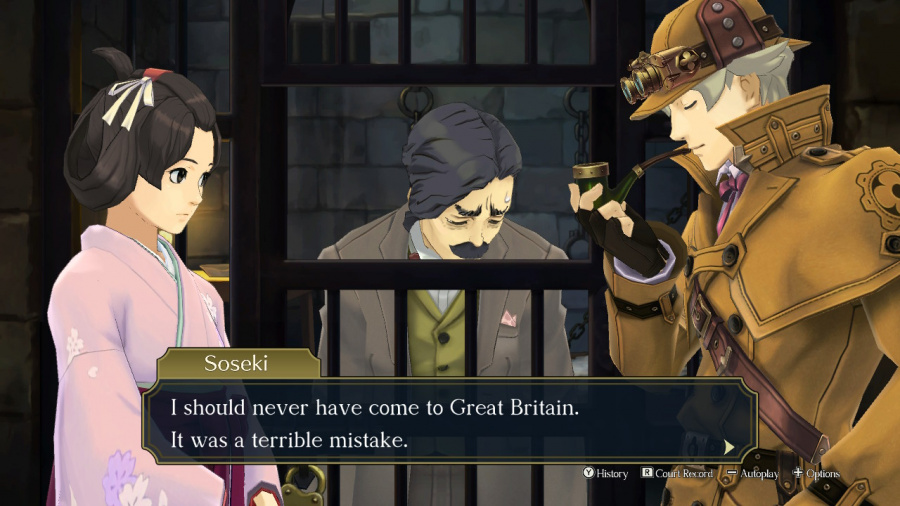 Finally, there’s the investigative gimmick, in which Sherl– sorry, HERLOCK SHOLMES, the legally-distinct-but-still-recognisable detective, makes a bunch of observations and then Ryunosuke has to gently redirect him to the right conclusions like an errant Roomba that’s stuck on a rug.

These might all sound complicated in theory, but in practice it’s like a whole new toybox filled with goodies; both the investigative portions of the game and the court cases are constantly giving Ryunosuke new things to do, rather than just clicking through text boxes. And, for the most part, they work fantastically: there’s just enough signposting that it’s easy to figure out what to do next, without the dreaded boring bits where you’re either too far ahead of the case, or have absolutely no idea what to do. Some parts will even require you to make rather exciting leaps of logic, but they’re relatively small leaps; all the same, you’ll feel smart.

The characters take a while to grow on you, especially if you aren’t a fan of Herlock Sholmes’ personality — which lies somewhere in the intersection between David Tennant’s Doctor Who, Douglas Adams’ Dirk Gently, and an over-confident golden retriever. Ryunosuke is charmingly earnest, as he accidentally implicates his clients over and over again through overenthusiastic attempts to find the truth; his sidekick, Susato, begins as a distant but knowledgeable assistant and matures into a version of Maya that’s much better at her job (sorry, Maya). 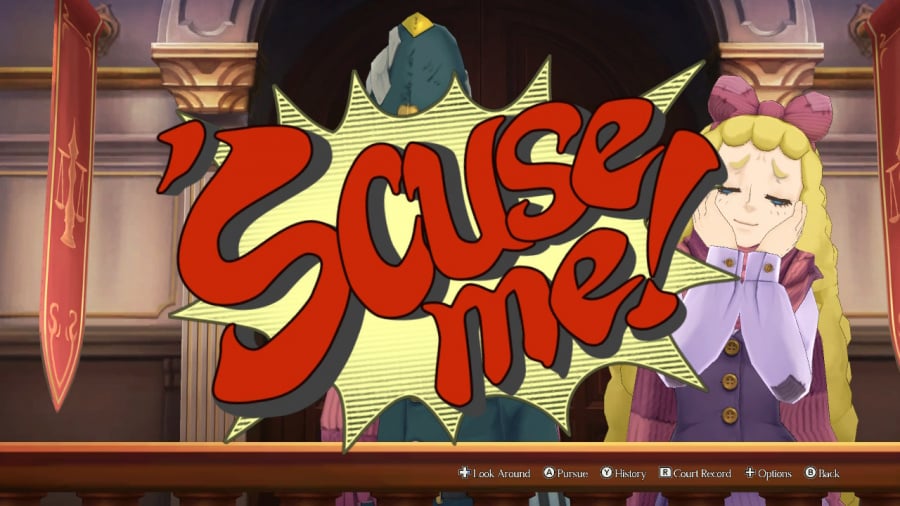 The accessibility options in the game deserve a shoutout of their own: although you can’t change the text size, you can change the speed, the textbox transparency, and even set it to Autoplay (which runs through the text automatically, but still requires you to do the inputs) or Story Mode, which automates the entire thing, no button presses required. You can also turn off vibration and screen flashes, if you wish. You can also play the cases in any order, from various chapters in the case, sort of like a DVD selection menu; this makes achievements easier to get. We’re not entirely sure why the game has achievements, but a lot of them add nicely to the goofiness of the Ace Attorney series, like an achievement for examining every ladder (for the longtime fans).

Speaking of DVD selection menus, The Great Ace Attorney has a lot of special features, too, and they’re very much worth checking out. From DLC costumes for the second game to unused voice recordings, concept art, scrapped music, and all the trailers, animations, and weird little vignettes that were used to promote the game, there’s a lot to check out, and almost all of it has developer commentary, too. We even found ourselves wishing for a developer commentary for the whole game… but that’s probably too much work.

Plus, the score is fantastic. It’s hard to say if it’s as memorable and iconic as the original tunes, because it’s so much richer and more complex, and we haven’t been exposed to it for 20 years; nevertheless, it takes the music we know and love and reworks it into something familiar, yet new. 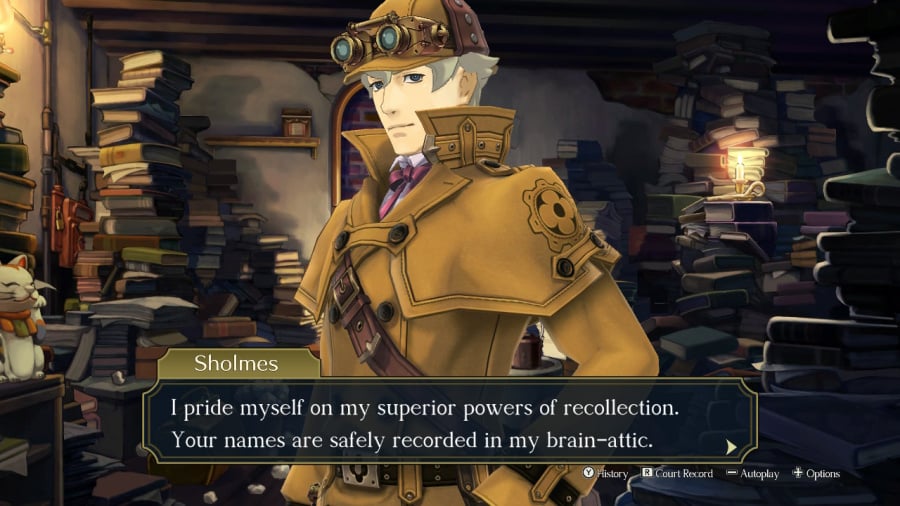 But we’re nearing the bottom of the review, and you know what that means by now: the bad news, the annoying bits, the negative points that go on the right of the summary. So, here goes.

For one, the cast of repeating characters is weirdly small, and you’ll be left feeling at times like the population of Victorian London was no bigger than the number of people in a Sainsbury’s (supermarket, if you don’t know) on a Tuesday evening. The same handful of people will play all the various roles: witness, victim, suspect, and the real murderer, like a play where the production company could only afford three actors. It’s an odd choice in some respects, but it allows you to really get to know those people — and their foibles and motives.

Secondly, the game withholds quite a few of its answers until very, very late in the game — by which we mean the second game in the duology — which must have been odd when the first game came out, since there was no guarantee of a sequel. With the two cases bundled as one it’s less of a big deal, it just makes some of the more major secrets feel a bit drawn-out. 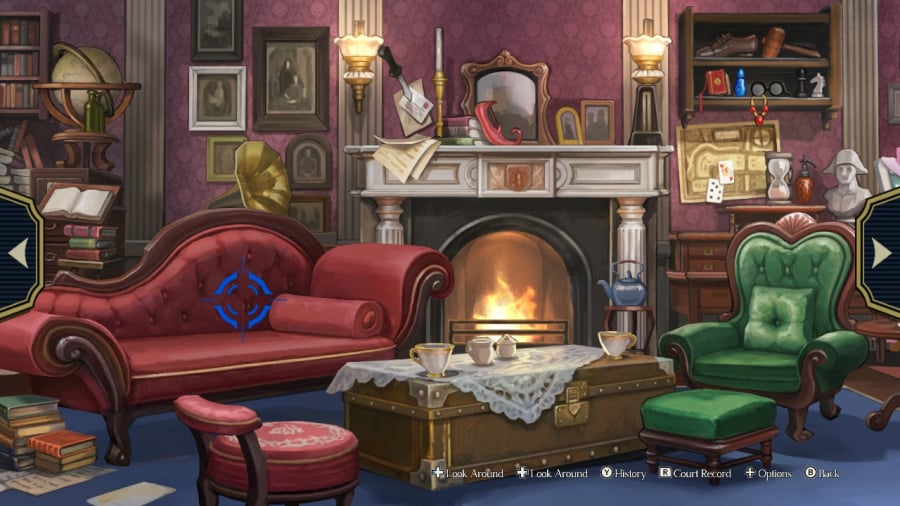 Thirdly, the historical setting can hold the game back a little on occasion. A lot of things either don’t exist (fingerprinting, DNA testing, Luminol) or they’ve just been invented (photography, the formalisation of the legal system). To get around this, Herlock Sholmes will often just sort of… invent the technology, which we’re honestly willing to suspend our disbelief for; he is a genius, after all, and it is a lot more fun to be able to spray down surfaces to find fingerprints, even if it is anachronistic.

And… that’s about it. To summarise: it’s sometimes hard to follow along with all of the Japanese cultural references and in-jokes; the cast feels a little small; the game is frustratingly coy about its secrets; the need to rely on historical accuracy means that a lot of the staples of modern justice are absent. But what’s new? Many of these things have been part of the Ace Attorney series for a long time, albeit in smaller doses; it’s hard to imagine anyone really holding it against this beautiful, thoughtful expansion to the story for giving us more of the same.

And that’s exactly what fans want: more of the same, but better. This content-stuffed bumper pack of gorgeously remastered stories is exactly what we were hoping for, and more.