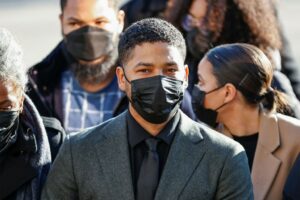 Last week, former Empire actor Jussie Smollett was found guilty by a Chicago jury on five of six counts of lying to police on January 29, 2019.

Now, the lone Black juror is questioning why Smollett would place the noose back over his neck when police officers responded to his phone call.

“I’m not putting that noose back on at all,” the juror, Andre Hope, said.

According to ABC 7 Chicago,  Hope questioned the motive of Smollett in the tale he told police officers that fateful night nearly two years ago. “I still have not figured out a motive for why he did, why this had to even happen,” Hope said. “He was a star.”

The 39-year-old actor claimed that he was attacked by two white  men who allegedly shouted racist and homophobic slurs toward him at 2 a.m. as he was returning home from a Subway restaurant. He told police officers the men threw some type of liquid on him and then placed a noose around his neck. He went home with the noose still hanging from his neck, took it off, but placed it back around his neck when police officers arrived.

Hope, 63, is a retired Cook County Forest Preserves employee who is married with two sons around Smollett’s age. He said the story that the actor gave “didn’t add up.”

Although Hope said there were no arguments in the jury room during nine and a half hours of deliberation, he was disappointed to have been the only Black person on the panel.

“Because how can we say that this is a jury of your peers when there’s only one African American?” he explained. “And there were plenty there, so you could’ve gotten two, three, four. African Americans can handle the truth, too. And we can give an impartial judgment on a case.”