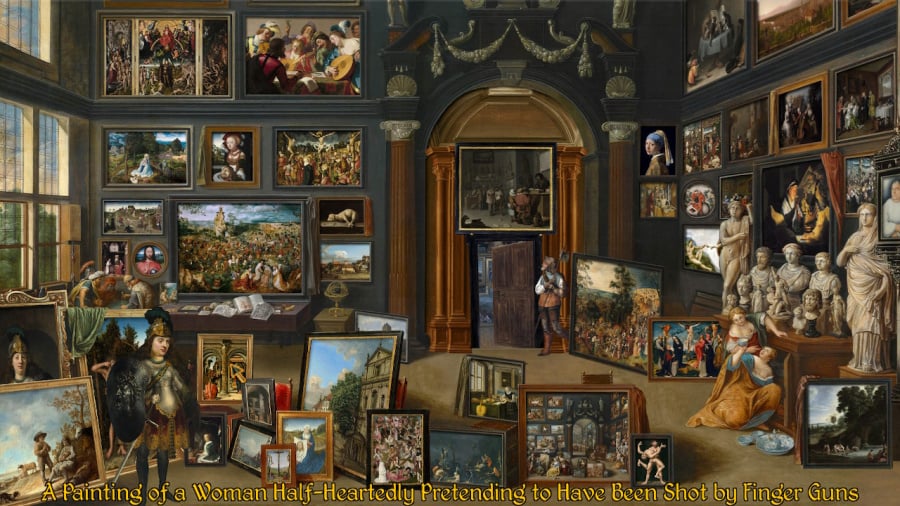 The very first moment you lay eyes on The Procession To Calvary you’ll probably be reminded of the iconic British comedy series Monty Python, thanks to the use of cut-up, pre-existing classical artwork. However, while this is a huge part of the game’s visual appeal, its sense of humour is actually more unique than that, and it often challenges genre favourites such as Monkey Island and Sam & Max when it comes to absurdist jokes and belly laughs. In fact, we’d even dare to say that, in its funniest moments, The Procession To Calvary (named after the Pieter Bruegel the Elder painting of the same title) even manages to surpass those titles.

The game is essentially a point-and-click adventure that uses the analogue stick and buttons rather than the Switch’s touchscreen – a system that works perfectly well, despite the misgivings we initially harboured. You assume the role of a female warrior who is tasked with ridding the land of the murderous despot Heavenly Peter, but actually getting within a sword’s swipe of Pete is a challenge; you’ll have to solve puzzles, help NPCs, run errands and all of the other good stuff that point-and-click adventures are famed for.

The interesting thing is that you’re able to kill quite a few of the NPCs in the game, which seems to offer a far easier solution to some of the puzzles. Is a character refusing to give you an item you need to progress? Rather than spend time trying to figure out how to get them to acquiesce, why not just run them through with your blade and take the item by force? The downside here is that by slaying characters, you lock yourself into the ‘bad’ ending, with many of the puzzles inaccessible for the remainder of that playthrough (unless you revert to a previous save, of course). Still, it’s often possible to solve puzzles in more than one way, and your sword can be used for things other than blind murder. The onus is on you to experiment, which adds to the game’s longevity – as do the three possible endings.

There are some issues. The script is almost entirely excellent, but there are a few grammatical errors here and there which take the shine off things. The load times when switching between scenes also feel slightly too long, and during one section the game refused to acknowledge we had a certain item in our inventory, although immediately replaying the section a second time seemed to solve this. Some of the puzzle solutions are a little bizarre, too, but thankfully the ability to highlight all on-screen areas of interest usually means you can trial-and-error your way past roadblocks. You could also argue that once you’ve finished the game and found all of the endings, there’s little reason to return, but this is hardly a unique criticism of a point-and-click title.

Ultimately, The Procession To Calvary is one of the most amusing and unique video games we’ve played in some time on Switch, and if you’re a fan of the genre, then it’s absolutely worth your time.

Valve Responds To 'Switch Vs Steam Deck' Comparisons, Insists It's "Going After" A Different Audience

Should I Tell My Parents I'm a Millionaire at 22?