In March 2020, Asia Abston lost her job due to the COVID-19 pandemic. She had no college degree and no corporate experience because she had been a bartender for over a decade.

Some 20 months later, Abston has built a multiple, six-figure business as a drop shipper and business coach, with her business income surpassing $300K in revenue so far this year and counting.

Abston is the founder of The Luxe Life Academy, where she teaches her students about e-commerce and social media marketing.

The pandemic forced Abston to turn her side hustle as a drop shipper into full-time income.

“I was making six figures as a bartender. I spent less than $500 starting my side hustle as a drop shipper, and I was bringing an extra $1,000 a month here and there. But, in March 2020, the world fell apart,” Abston shared in an interview on The Dreamers Podcast.

Her job shut down for months due to the pandemic, and her unemployment checks weren’t enough to cover her $2,300 a month in rent plus other expenses. That’s when Abston realized she needed to figure things out, or she might have to move back to Chicago to live with her parents.

“I dropped out of college and was a bartender for 10 years. So on paper, I’m not qualified to get a job. So, I decided to put all my energy into drop shipping because I did not want to be homeless or broke,” Abston told BLACK ENTERPRISE.

She committed to turning her side hustle as a drop shipper into the equivalent of her full-time income and spent the summer learning as much as she could.

Abston has been a podcaster for four years. On her show, she talks about entrepreneurship and side hustling. During the pandemic, she shared that drop shipping was what was keeping her afloat. So many listeners reached out to her wanting to find out more.

That’s when she did an Instagram Live to talk about her experience. During the Live, several people asked her to teach them how to become successful at drop shipping.

That’s when her friend and fellow business coach, Ellie Diop, encouraged Abston to put her knowledge into a course.

Abston’s drop-shipping store has generated over $100K in 12 months. Since then, she has had over 2,000 students, and her social media following has grown to over 50,000 people. 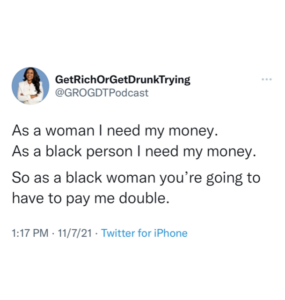 “The power of social media has changed my life. As the person who was the class clown and barely made it through school. People organically find me using Instagram. So, I’m using it as a tool to show other entrepreneurs or aspiring entrepreneurs that you can build a brand on this free platform and turn it into multiple six-figures and on your way to seven- figures,” Abston told BLACK ENTERPRISE.

Abston believes that digital entrepreneurship can help level the playing field regarding the racial and gender wealth gap.

“I’m the child of a convicted felon. I got straight C’s and D’s and barely got out of high school. I worked as a bartender for a decade of my life. Nobody in my family owns a business, and I’m a Black girl. So I know what insurmountable odds look like. But my coaching business is on track to clear $400,000 by the end of this year,” said Abston.

“There are kids earning $10 million a year playing with toys on YouTube. There’s money to be made. The best thing anyone of any age, talent level, or background can do is to hop on the wave now,” she added.

Black Restaurant Entrepreneurs Awarded $10,000 And More After Struggling Through Pandemic