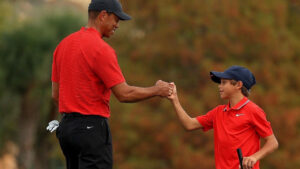 After being involved in a car crash last year, professional golfer Tiger Woods will return to the green later this month, on Dec. 18.

Woods announced to his 6.5 million followers on Twitter that he would be playing at the PNC Championship. He also mentioned that he wouldn’t go at it alone as his 12-year-old son, Charlie, will be playing alongside him.

Although it’s been a long and challenging year, I am very excited to close it out by competing in the @PNCchampionship with my son Charlie. I’m playing as a Dad and couldn’t be more excited and proud.

According to The Golf Channel, the PNC Championship, a father-son tournament, will take place in Orlando, Florida, and is spread over two days. The 36-hole event will be Woods’ first tournament since the duo participated in last year’s PNC Championship. On Feb. 24, he suffered major injuries to his right leg in a car accident near Los Angeles.

The news was well-received by Twitter users who are excited to see him play.

The -time major champion will return to competitive golf with his son Charlie at next week’s #PNCchampionship.#CelebrateFamily pic.twitter.com/QL2tCZ1yZA

Congratulations Tiger, Dad & Son. It is good to see you are getting out&https://t.co/uxQJXRgNB9 always inspired me your press in life. Keep pressing Tiger. God Bless you. ❤️❤️@wailingwomen12
Darlene Turner

Best news of the day!! pic.twitter.com/HnoqHu5eAC

Tiger is the most exciting golfer ever! Audiences love watching him.

Tiger, go for it. My hero always will be Seve. But I have to admit that you are the Greatest golfer I’ve seen. I can’t imagine anyone putting four better rounds together than your four at Hiylake. If they were a painting they be a masterpiece

U R a Special Man, Special Dad❣ Spending time w yr son is Everything, n on the coarse, 2gether, doing wht U Luv; the best!
My Sis n Law had a skiing accident 7mos ago w these horrific, injuries! She’s a personal trainer, can do much, has a bit to go!
God Bless cont healing