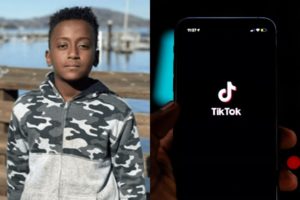 There is growing rage against TikTok for what’s been dubbed the “Blackout Challenge” and the series of child deaths it’s accused of causing.

The social networking app has been under fire following the latest “Blackout Challenge”-related death of 12-year-old Joshua Haileyesus.

The young Aurora, Colo resident died two weeks after being found unconscious inside his home on March 22, CBS Denver reports. He was placed on life support but did not recover.

Haileyesus’ family believes the boy became unconscious after trying to choke himself with a shoelace while attempting the online “Blackout Challenge.” The online challenge encourages participants to film themselves holding their breath or asphyxiating themselves to the point of passing out.

His family hopes to spread awareness to prevent other children from suffering the same tragic fate as their son.

“I would never imagine my son would do such a thing,” said Joshua’s father, Haileyesus Zeryihun. “I’m paying the price right now, I’m living the life, and I hate for other parents to go through this.”

Haileyesus’s death is the latest in a string of other child fatalities linked to the “Blackout Challenge,” CBS News reports.

“TikTok’s just not a safe place for kids,” said Dalia Hashad, an attorney who is advising the nonprofit ParentsTogether in its fight against TikTok. The group launched a petition urging the app to create “mirror accounts” where parents can spy on their children’s activity.

TikTok does have parental controls, but none that allow parents to see what their children see on the app. They have also blocked content and hashtags related to the blackout challenge.

“TikTok has taken industry-first steps to protect teens and promote age-appropriate experiences, including strong default privacy settings for minors,” the company said in a statement.

Haileyesus’s family has launched a foundation in his name called Joshua Keep Shining. A GoFundMe has raised over $180,000.

“I’m sure Joshua, if he knew this was going to kill him, I know he wouldn’t do it,” his father said.

Monster Train And Its DLC Are Now Available On Switch