British practice Tim Ronalds Architects has converted a 19th-century malt house in Canterbury into a theatre for The King’s School, using an “as found” approach that celebrates the industrial building’s original steel, brick and timber structure.

The London-based firm completed The Malthouse in 2019, following an invited competition by the school to create a host of new spaces, including a 400-seat theatre, dance and drama studios, dressing rooms and wardrobe facilities.

Adopting an approach of “doing no more than was necessary”, much of the existing layout and finish of the original 1898 building has been retained, with what the practice call “structural surgery” used to create the new spaces.

“The Malthouse looks monolithic, but within has three distinct parts which mirror the [malting] process,” explained the practice.

“In each part, the aim was to preserve the quality of the found space – the warm, rough texture of the thick brick walls, the muscular cast iron columns and beams, the heavy timber floors and trusses.”

In the centre of the building, the large central kiln was cut away to open up a foyer space, centred around a weathering steel and wood staircase illuminated by a skylight in what would have been one of the malt house’s ventilation stacks.

Perforated terracotta tiles designed for drying grains above the kiln have been retained as the floor surface on the landings, with areas of the steel grid supporting them left open to allow light from the skylight to pass through.

With no existing area large enough to support an auditorium, new steel trusses were inserted into the roof to allow the existing columns and floors to be cut away. This created a triple-height space with flying facilities and an orchestra pit.

The roof structure in the auditorium has been left exposed. Where new additions have been made for the raked seating and balconies, robust materials such as wood and steel that mirror those of the industrial structure were chosen.

“The new elements were to be neither distinct nor in ‘period’ style, but to have the same quality as the original building,” said the practice.

“Everything was made plain and built to last. Theatre balconies were the simplest construction of boards and brackets, services were concealed, structures left exposed.” 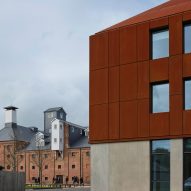 On the other side of the foyer in the former warehouse space, two large studios occupy the top floor beneath sloping wooden ceilings, with the original large wooden trusses replaced by lattice steel beams to increase the head height.

Below these studios is a double-height dining hall and a series of smaller classrooms on the first floor, and a kitchen and toilets in the vaulted ground floor spaces.

Externally, a series of later additions to the building have been stripped back. The practice reinstated the original white-painted chimneys and hoists, and painted “Malthouse” on the exterior in a nod to historic industrial signage.

The new entrances are set back from a row of three unadorned brick openings at the building’s base, which the practice kept to create a sense of “mystery” around the building’s new use.

The Malthouse sits alongside the recently completed King’s International College by Walters & Cohen, which also references the site’s industrial heritage through its use of exposed concrete and weathered steel.

The photography is by Philip Vile.