I’m not afraid to say that I enjoy silly gimmicks. For example, racing games generally don’t interest me. However, when you toss in some Koopa shells, loop de loops, and Waluigi? You got me. When I play Super Smash Bros., I want all items turned on and to play on the wackiest stages available. If you align more with the “Fox Only/No Items/Final Destination” style of play, I’m more impressed by how you manage to make an inherently silly game boring more so than by how many frames you can read.

The same applies to shooters. Sure, I can enjoy standard multiplayer titles like Call of Duty or Halo, but they rarely hold my interest long-term, especially if I don’t have friends to entertain me. “Do the same stuff you did in the campaign but less interesting and with real people who behave like gremlins?” No thanks. It takes something extra special/weird to keep me on board, which is why Splitgate has recently tickled my fancy. 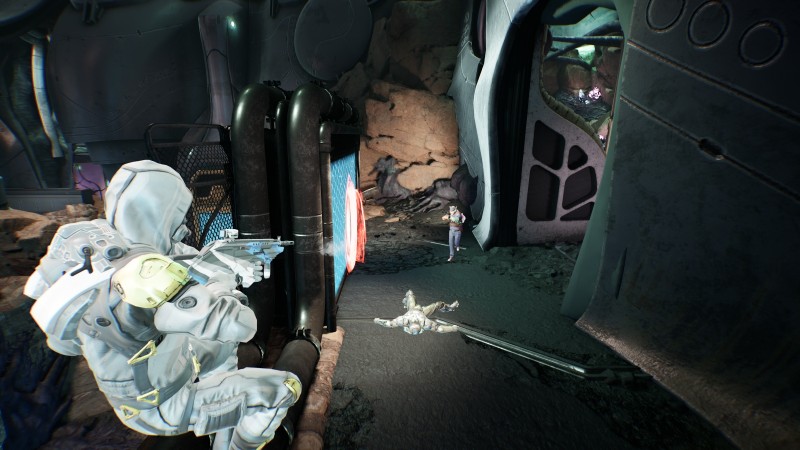 Splitgate is a free-to-play arena shooter reminiscent of Quake and Halo that also gives you a Portal gun. Yes, you can create portals that function identically to those found in Valve’s acclaimed puzzle series. The difference is you use them to find creative ways of shooting people in the face. You may remember when it launched in beta on PC in 2019. Since then, the game has been revamped and recently landed on consoles in a new open beta that has proven to be incredibly popular.

I finally joined the fun last week, and, as a Portal fan, I was immediately on board. The portal mechanic works great and adds an entertaining and thoughtful layer of strategy to what would otherwise be a decent-but-not-amazing arena shooter. It’s been a blast figuring out what heavily trafficked spots to create windows of death for me to snipe through. I also get way too much enjoyment out of shooting portals underneath opponents’ feet and watching them fly out of a wall somewhere. I couldn’t care less about everything around the edges, such as Splitgate’s obligatory battle pass and cosmetic unlocks. Weaponizing portals to outmaneuver and outsmart other players is all I need to get my jollies.

Even though I’m getting my kicks, it seems many of the players I’ve faced are either still adjusting to Splitgate’s learning curve (fair) or are falling into their shooter comfort zones. In at least half of the matches I’ve played, most players don’t bother using the portals at all. Once again, it’s like playing Smash Bros. with that overly competitive player. The one who insists on maintaining the “purity” of the experience while I’m arguing with them on why every player deserves copious Smash Balls and assist trophies. 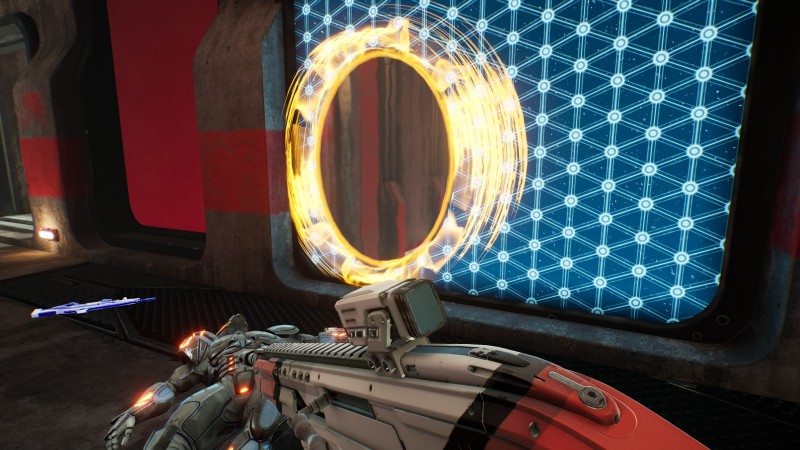 The difference now, though, is that while that straight-laced Smash player will probably wreck me harder without having my toys to fall back on, you’re at a serious disadvantage by not using the portals in Splitgate. I’d wager the best pure player would still have problems dealing with someone who has mastered portal jumping as it really creates all sorts of zany moments and strategies you don’t see elsewhere. It’s sort of like playing Fortnite if you’re a good shot but suck at the building mechanic. Speaking from experience, pure gunplay only gets you so far before you come across someone just as capable with a firearm but who can also erect the Taj Mahal in seconds to protect themselves and snipe you from above.

I’ve demolished portal-resistant players in ways that often feel unfair because I’ve embraced the silly. Like, I seriously messed them up, and that’s strange for me because while I’m an above-average shooter player, I would never consider myself anywhere close to top-tier. Splitgate makes me feel like those savants who maintain permanent residence atop the leaderboards by rewarding my inborn desire to play games as creatively as possible. That’s an eloquent way of saying that it pretty much rewards being a chaos-loving idiot.

So if you’re planning to play Splitgate, my advice to you: loosen up your tie, mess up your hair, and remember that there’s more than one way to skin a cat. You can also use a portal to send it off a cliff or something. So get wild and use that portal gun! It’s more fun, and I probably won’t end you as often.

Splitgate is currently available in open beta on PlayStation 4, Xbox One, and PC. The full launch is scheduled for sometime this month.