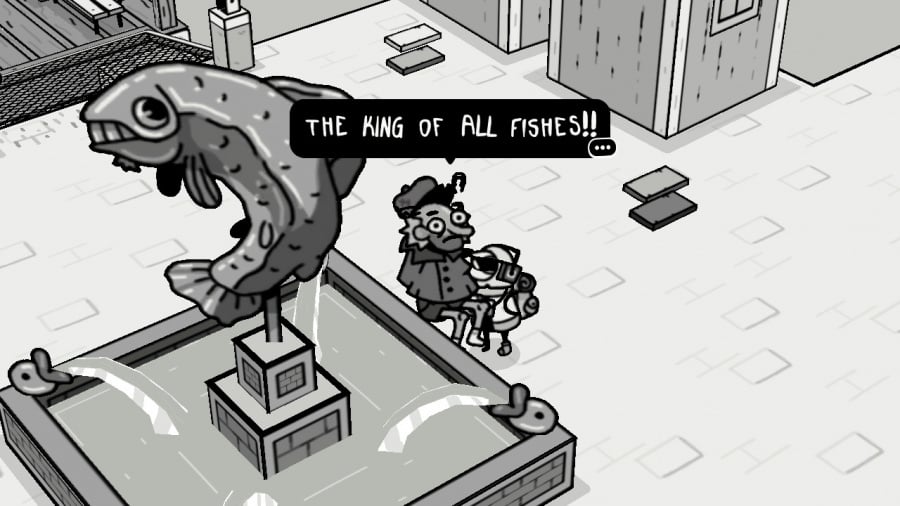 Toem is a charming photography game that’s full of great moments, a lot of heart, and clever puzzles. You’ll travel around the black and white world, encountering interesting characters, all set in diorama-style levels that are begging you to explore them. By solving their problems with your trusty camera, you’ll earn stamps to allow you to move on to the next bus stop, ready to see what’s next.

Toem begins almost like a Pokémon game. You wake up in your small town, ready to start your grand adventure. Before you can leave you’re of course given your obligatory running shoes (well, they’re clogs in Toem, but you get the idea) and you’re off, to be the very best – photographer, that is. The whole game is presented in black and white, with shades of grey used to add texture to the different areas you’ll visit. For a game entirely about taking pictures, you’d think that this limited colour palette would hurt the experience, but it doesn’t; if anything, it makes you focus on the composition of your shots more.

Puzzles in Toem often involve a character asking you to show them a photograph of something they’re missing, or someone they’re looking for. An early quest will see you look for someone’s missing sock, only to have to win it back in a game of chance from a ghost. (How a ghost stole a sock in the first place, we’re not sure – do they even have feet?) Anyway, as a reward you’ll earn a stamp, collecting enough stamps will let you move on to the next level. You’ll also earn new clothes and occasional upgrades to your camera. By the end of the game, we were walking around with a foam finger and a fishing hat, the peak of high fashion.

Arriving in a new location in Toem is always exciting, because you often have to talk to everyone in the area, and experience all the unique wildlife before you can start putting the pieces together and solving the puzzles. They’re all fairly simple, the worlds aren’t huge so you’re not going to be searching for days, but none of them feel laborious. You’re always rewarded with some funny dialogue, and a great picture, the best reward for aspiring photographers.

It’s a short, relaxing game that we found ourselves easily finishing in one 3 or 4 hour sitting, but we loved every minute of it. It’s perfect for a rainy day or a long car journey; it’s the rare game that feels genuinely cozy. There’s fun to be had looking back at pictures from earlier in the game, when you’re still learning the rope and can barely keep the subject in frame, to the well-captured compositions that you manage to create as the game is wrapping up. Like us, you won’t be able to resist the urge to go back for every stamp, every secret, and every brilliant line of dialogue.

Toem is refreshingly accessible, too. You don’t even need to take brilliant photographs – outside of one or two missions, the game is fairly generous with what it will accept as the resolution to quests – but we found ourselves making sure that everything we took looked nice, because there’s enjoyment to be found in the process – just as there is taking a photo in real life.

Like a great album you put on at the end of the day to wind down, Toem is an incredibly relaxing experience that you’ll wish you could experience all over again once it’s finished. It almost makes us want to start capturing photographs of the world around us, but sadly, we don’t have a duck dressed as a lighthouse keeper to show them to. If only.