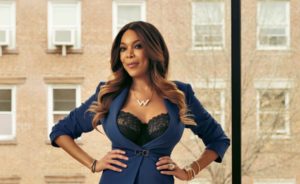 The return of daytime television host Wendy Williams is still a topic of discussion.

While there have been guest hosts filling her slot on The Wendy Williams Show as she recovers from a COVID-related sickness and another bout with Graves Disease, rumors have swirled that the talk show host is currently in a wheelchair and may be dealing with the early effects of dementia.

However, her brother Tommy has spoken with The Sun to refute the talk surrounding his sister’s mental health.

It was reported on The Rickey Smiley Morning Show earlier this week that Wendy is confined to a wheelchair and that she has onset dementia.

“Word on the street is Wendy is confined to a wheelchair. According to a report, she has lost all blood circulation in her legs and in her feet. And she is in this wheelchair and they say the return to the show is not looking good,” a Smiley gossip contributor said on his show.

“We gotta pray for Wendy. We know that she’s been battling with addiction, alcoholism, all that good stuff, and it’s also been reported that Wendy has been suffering from the early stages of dementia.”

Yet, according to her younger brother Tommy, that’s not true.

Tommy told The Sun that his sister has not been “displaying that type of behavior to the family.”

“We haven’t had any alerts like that and I haven’t seen anything like that or have had conversations with her that would lead me to believe that. We routinely go up and check on Wendy even though we’re all down here in Florida. I try to make it up there and my dad speaks with Wendy frequently. So no, we don’t have any concerns concerning her mental state. It’s all physical.”

Tommy also mentions that Wendy is mentally well enough to likely go down to Florida to visit her family for the upcoming Thanksgiving weekend.

Two months ago, the show’s official Instagram account revealed Williams had tested positive for COVID-19. TMZ also reported that Williams voluntarily admitted herself into a New York City hospital for a psych evaluation. The hospitalization came after the talk show host’s COVID diagnosis was confirmed. Her brother, Tommy gave her fans an update on his sister’s condition, letting them know she’s pushing through.