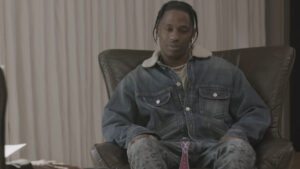 In an exclusive interview with The Breakfast Club’s Charlamagne Tha God, hip-hop artist Travis Scott says that despite reports, he did not know that fans were dying as he was performing at his Astrowold festival last month.

Charlamagne sits down with Scott to discuss the tragedy at Scott’s Astroworld Festival on Nov. 5. Ten people died while attending the first night of his Astroworld festival, which was in its third year. Several hundred people were injured from a stampede as Scott performed on stage. Reuters reported that the Houston Police Department opened a criminal investigation.

The astute businessman responded to rumors that he ignored pleas to stop the performance as several concertgoers died during his performance on stage. Saying he was unaware of the tragedy taking place, Scott stated that artists typically rely on and trust professionals to make sure audience members “can leave safely” once the show is done. Scott also said it’s their duty to figure things out if “something unfortunate happened.”

“As artists, you trust professionals for when things happen that people can leave safely,” Scott tells Charlamagne. “This night was just like a regular show, it felt like to me, as far as the energy. People just showed up to have a good time, and something unfortunate happened, and we just need to figure out what that was.”

According to Local 10, victims from the show who passed away ranged from 9 to 27 years old. Approximately 300 attendees were injured and treated at the venue, whereas 25 people were taken to local hospitals.

Presently, there are more than 300 lawsuits filed in Houston, and they all will be consolidated and heard by one judge. There is also an ongoing criminal investigation being conducted by the Houston Police Department. No one has been charged, and no timetable has been set for the completion of the investigation.

You can view the full interview below:

Healing After Heartbreak: How to Turn Your Pain into Your Greatest Superpower

100 Affordable Gifts Your Friends and Family Will Actually Want