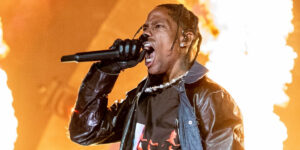 Popular rapper Travis Scott has vowed to help the families of the victims who lost their lives at a recent festival he headlined in his home state of Texas over the weekend.

In the aftermath of the tragic deaths that took place at Astroworld, Scott has already been hit with two lawsuits.

According to the Daily Mail, Scott released a statement a day after eight people died while attending the first night of his Astroworld festival which was in its third year.

Several hundred people were also reported injured from a stampede as Scott was performing on stage. Reuters reported that a criminal investigation has been opened by the Houston Police Department as Police Chief Troy Finner confirmed that there were reports of a concertgoer at the venue “injecting other people with drugs.”

Finner said that there was one report, from a medical professional who treated a security officer “who felt a prick in his neck” as he tried to restrain someone and then went unconscious. He was revived with a dose of the opioid antidote naloxone. The police chief also mentioned that medical staff also observed what appeared to be a needle mark on the officer’s neck.

Saturday on his Instagram account, the 29-year-old Scott posted a message to his followers addressing the tragedy that happened Friday evening. Via his Instagram Live he stated:

“My fans really mean the world to me and I always want to leave them with a positive experience. Anytime I can make out anything that’s going on, you know, I stop the show and you know, help them get the help they need. I could just never imagine the severity of the situation. To the ones that was lost last night, we’re working right now to ID the families so we can help assist them through this tough time. I’m honestly just devastated… I could never imagine anything like this just happening.”

Lawsuits In The Aftermath

Meanwhile, in what will be the start of many lawsuits filed, two have already been reported to have been filed

According to the lawsuit, Paredes is seeking more than $1 million for the injuries he suffered, some of which he claims are permanent, and to help cover medical expenses.

He lists Drake in the suit because the Canadian rapper appeared onstage alongside Scott and “helped incite the crowd.”

According to CNN, another concertgoer is suing Scott, Live Nation, concert promoter Scoremore and others involved in the event. Manuel Souza claims he “suffered serious bodily injuries when the uncontrolled crowd at the concert knocked him to the ground and trampled him.

“Defendants failed to properly plan and conduct the concert in a safe manner. Instead, they consciously ignored the extreme risks of harm to concertgoers, and, in some cases actively encouraged and fomented dangerous behaviors. Their gross negligence caused Plaintiff serious injuries.”

Souza is also suing for $1 million.

5 Bill Pay Services — Plus Other Options for Automating Bill Payments