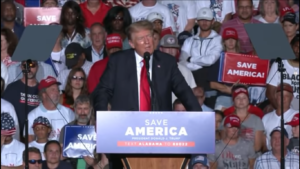 Former President Donald Trump was booed at his own rally in Alabama Saturday for telling his supporters they should get vaccinated against COVID-19.

Trump, who held one of his rallies in the city of Cullman, touted the fact that the Pfizer, Moderna, and Johnson & Johnson vaccines were created and developed during his administration. The former president then pushed his loyal base to take the vaccines. The crowd responded with a chorus of boos.

The response is new for Trump. The former Apprentice host usually hears boos when he mentions Democrats like President Joe Biden and House Speaker Nancy Pelosi.

“You know what? I believe totally in your freedoms. You got to do what you have to do, but I recommend: Take the vaccines. I did it – it’s good,” Trump responded.

The mostly maskless crowd continued raining boos on Trump, who acknowledged their reaction.

“That’s alright. You got your freedoms. But I happen to take the vaccine. If it doesn’t work, you’ll be the first to know,” Trump told the audience. “I’ll call Alabama and say, ‘Hey, you know what?’ but it is working. But you do have your freedoms.”

According to USA Today, Alabama has the lowest vaccination rates in the country as just 36% of residents are fully vaccinated. Currently, only Idaho, Wyoming, Mississippi, and West Virginia have a lower percentage of residents who have taken at least one dose of the vaccine.

However, it seems the news of Alabama hospitals hitting their ICU capacities has scared residents into taking the vaccine as numbers are steadily climbing. According to Alabama’s public health department, nearly every county in the state has been declared a high designated area.

Trump, who contracted COVID-19, and his wife Melania were vaccinated before they left the White House in January, but it wasn’t discovered until March as the former president tried to keep it under wraps. While he was president, Trump continually denied the existence of COVID-19 until he announced in March 2020 that 200,000 Americans would die.