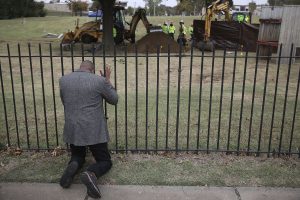 An Oklahoma plan for the reinterment of the exhumed bodies of victims of the Tulsa Race Massacre was met with protests by last week.

According to the McAlester News-Capital, archaeologists and other Oklahoma officials planned a private ceremony to reinter the bodies that were exhumed as part of an investigation into the Tulsa Race Massacre. That ceremony took place on July 27.

The reinterment came months after investigators exhumed the bodies from Oaklawn Cemetery to collect DNA evidence. In total, 19 bodies were reburied.

Protesters gathered outside of the cemetery to voice their consternation over the reinterment of bodies. Several of them were angry that the bodies would not receive a proper re-burial.

“This is totally disgusting and disrespectful that those are our family members and we’re outside the gate instead of inside that gate where they are,” said Celi Butler Davis. Davis said she is a descendant of one of the riot victims.

Officials blocked access to the public for the reinterment ceremony.

Another reason for the protests was concern that the forensic examination of the exhumed bodies was not enough and that a criminal investigation should have been the next step due to some of the injuries that were apparent in the bodies. This issue of criminal charges is something that state Rep. Regina Goodwin has been vocal about.

Forensic anthropologist Phoebe Stubblefield acknowledged that one of the exhumed bodies did have a bullet hole through its skull and said that none of the remains had been confirmed victims of the Tulsa Race Massacre. Collected DNA has yet to be fully analyzed.

Stubblefield also said that identification could take years, although the city plans to identify descendants of the riot victims and establish a memorial in the future.

The riot occurred in 1921 after a white mob attacked the prosperous Black enclave of Greenwood following the arrest of Dick Rowland, a teen suspected of raping a white woman. The allegation was false, and Rowland was released from jail, but not before the mob decimated the neighborhood in Tulsa where Black economics had flourished.

The survivors and descendants have fought for reparations throughout the years but have largely been ignored or offered impotent gestures such as a commission to consider reparations.

The city plans to place temporary markers on the graves until permanent ones can be installed. It is also looking at two other cemeteries that may have Tulsa Race Massacre victim remains.