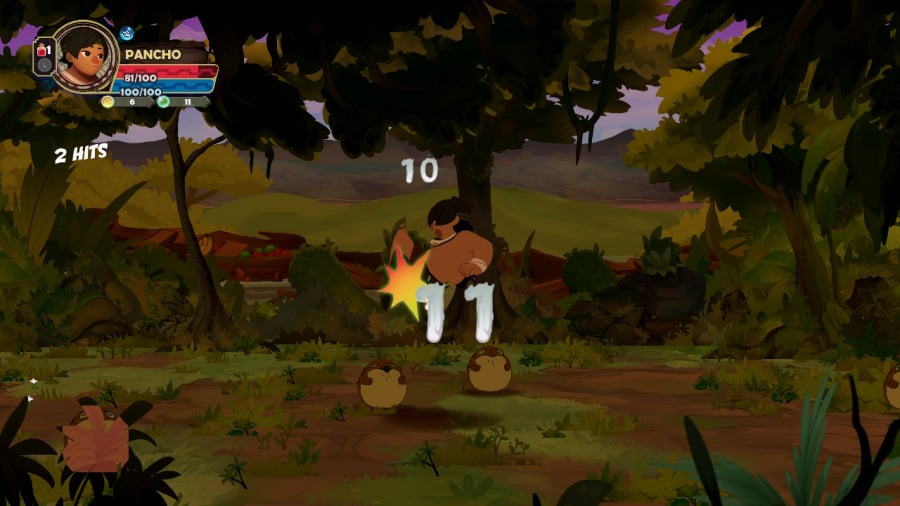 Are you looking for a fight, mate? Are you looking for a fight? Sounds like the threatening enquiry of a ne’er-do-well, but it’s the height of decorum compared to the typical inhabitant of a scrolling beat ’em up. Tunche is no different, as its assorted jungle pests don’t stop to ask how you feel about being licked, whomped, or banana-targeted – they just dive straight in and gnaw the HP off you.

The whole game doesn’t hang around to onboard the player either. There is a lot happening from the get-go, with Andrex-length scrolls of lore and instructions, a home camp screen that soon fills up with playable and non-playable characters, multiple collectible currencies, and stalls where you shop calculatedly through skill trees for multiple character profiles. That’s not to mention the in-play pick-ups and the constantly expanding movesets of each of five playable characters. For better or worse, it’s a far cry from the pick-up-and-play roots of the genre like Streets of Rage or Ninja Warriors (both excellently modernised for Switch in recent years).

So what more does Tunche bring to what is already a pretty cool table? First, you will have already noticed its artwork: painstakingly, lovingly crafted 2D drawings, inspired by South American folklore. These are animated satisfyingly and, for the most part, telegraph enemy moves so you can react to crowds of them – although the action can get muddied when the screen really fills up. Second, the ancient beat-em-up formula of simple action, ready to accommodate the casual button masher, has been dressed up not only with the collectibles and upgrades but with a roguelite mechanic.

In practice, this means starting the game with some of the characters is tough going. You’re supposed to get wiped out and sent back home, ready to power up a little and try again, eventually gaining the resources and the skill to get further through the jungle, unlock story sections, and seek the Tunche. But it feels harsh when the first plays can be very short and players are asked to wait close to a minute for the action to load. You’ll have plenty of chance to listen to the music, then, which brings enough ideas to stay interesting and provides a vibey backdrop. Sound design is solid and does justice to the visuals.

Tunche’s unlockable story segments feel a little wasted. They’re delivered through fabulous comic-book set-ups, and if only LEAP Game Studios had the confidence to let the drawings carry the narrative, they’d have made the most of their greatest strength. However, the comics can descend into yet more heavy, tiny text, sucking the magic out of it all.

Tunche looks and sounds good, plays neatly and consistently and is fun for couch co-op. However, it takes its punchy ideas and sneaks off into a dark, dirty alley where people just won’t want to go and find it. It is fun if you’re willing to get in there and get stuck in, but you’ll need to step over the broken glass of tiny screen text, try not to touch the wet-stained walls of repetitive, roguelite early encounters, and apologetically deny having any spare change to the drugged up yuppie of verbose exposition. In conclusion, if you are looking for a fight, mate, let us point you in the direction of Tunche.