A glass walkway connects both halves of this holiday home overlooking Quebec’s Brome Lake, which Atelier Pierre Thibault designed to offer a variety of outdoor spaces that connect the house to its natural surroundings.

Lac-Brome Residence is located in the sought-after destination outside Montreal, popular for secondary residences given its proximity to ski resorts in the winter and water activities during the summer.

Atelier Pierre Thibault was commissioned to create a single-family home overlooking the lake that would make the most of the surroundings while still protecting the resident’s privacy.

Unlike most of its neighbours, the residence is laid out on a single level. The low-slung stone home is made up of two angled volumes that are connected by a glazed walkway defining a courtyard on either side.

“Composed of wood and stone walls, the Lac-Brome Residence relies on the durability and nobility of natural materials in order to integrate in a refined, elegant and yet modest way into its environment,” said the Quebec City-based studio.

An overhanging roof projects from the edges of the building, creating a covered walkway around the perimeter.

The main living areas are located closest to the lake, allowing for expansive views of the water and forest beyond.

An open-concept kitchen, living and dining room connects to a screened-in porch and an exterior kitchen, allowing for flexible use of the interior and exterior spaces.

An outdoor fireplace is included for use during the winter, while the in-ground pool, outdoor shower and uncovered terraces can all be enjoyed through the summer.

“The diversity of outdoor spaces allows their use regardless of weather conditions and seasons,” said Atelier Pierre Thibault in a project description.

The bedrooms are further back from the water, which offers them more privacy. The primary bedroom occupies the eastern half of this wing, while two additional bedrooms are located to the west.

Within the main suite, an interior courtyard made of full-height glass walls encompasses a single tree, which the architects liken to an art object. 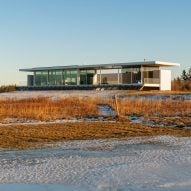 The exterior stone was also used inside, where it lines the entry passageway and forms as an accent wall in the great room.

The wooden structure of the roof is made visible throughout the interiors, lending a sense of continuity to each space.

“The color chosen for the wood interior coating is rich, achieving a harmonious balance in the perceived amplitude of the space,” said the architects. The wood also matches the tone of the custom wooden furniture used throughout the property.

This dark hue on the ceiling and window frames creates a cosy atmosphere in the rooms, and mimics the tree trunks surrounding the house.

Atelier Pierre Thibault has completed several homes throughout Quebec. Dezeen has rounded up five examples, which include a ski retreat shared by two brothers and their respective families, and a geometric white house that is covered in a wooden lattice.

The photography is by Maxime Brouillet.