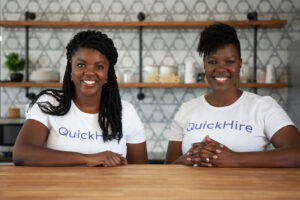 Two sisters’ hard work to create a platform where service workers can find career advancement opportunities earned them over $1 million in venture funding.

Deborah Gladney, 34, and Angela Muhwezi-Hall, 31, earned $1.41 million in a seed financing round led by MATH Venture Partners toward their platform, QuickHire—a career discovery platform for the service economy workforce. The funding will support the company’s technology investments and team expansion.

“Nearly 110 million people in the U.S. work in the service industry, yet, employment technology innovations primarily cater to white-collar jobs,” Gladney said in a press release.

Muhwezi-Hall added, “Given the service worker shortages across the county, we are helping workers and companies connect not just for a job, but for a career.”

Gladney and Muhwezi-Hall officially launched QuickHire in April 2021. To date, the platform has more than 60 paying clients, which includes mid-to-large service industry companies like Fuzzy’s Taco Shop and Homewood Suites by Hilton. In addition to businesses seeking talent, QuickHire has more than 11,000 job seekers using its services to find career opportunities.

The platform currently targets workers and businesses in the metro areas of Wichita and Kansas City. In 2022, the company plans to expand across the Midwest and add skilled-labor verticals.

“We see the QuickHire team approaching the market differently—putting skilled trade and service workers first in geographies that have been traditionally overlooked,” Dana Wright, managing partner at MATH Venture Partners said. “The timing is right for this approach. We are excited to be part of this funding round, providing fuel for product innovation and market expansion.”

“We spoke to a variety of investors during this oversubscribed round. This incredible syndicate represents who we are and where we want to go. From minority-focused funds to future of work expertise, this group truly aligns with our vision and strategies,” Gladney said.

After the historic $1.41 million in funding, Gladney and Muhwezi-Hall became two of about 100 Black women to raise more than $1 million in venture funding as of December 2020, according to ProjectDiane.

“We are underserved founders serving underserved workers. The more barriers we can remove, the more opportunity we can unleash for deserving, hard-working people,” Muhwezi-Hall said.

QuickHire is available to job seekers for free. The app version can be downloaded through Google Play or the Apple Store.