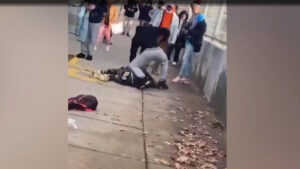 A high school student was assaulted and stomped in the head and another was pistol-whipped on Monday at a high school in Staten Island, NY.

According to The New York Post, two students at Susan Wagner High School in Staten Island were attacked and beaten, just weeks after another fracas took place at the same school. A cell phone video clip appears to show both students being attacked. One student is shown being kicked and stomped on as other students watch in horror. The assailant is seen punching the boy in the face as he also stomps on his head as the student lies on the ground unprotected.

In the other confrontation, another person is seen hovering over a different student as he is holding what looks like a pistol. According to eyewitnesses on the scene, the student was pistol-whipped by the attacker as he lay helpless on the concrete sidewalk.

The two assailants reportedly were not students or were affiliated with Susan Wagner High School based on a statement from the Department of Education.

“Ensuring our students can safely travel to and from school is the top priority of both the DOE and NYPD, and this deeply disturbing incident involving two individuals from outside the school community is unacceptable,” said spokesperson Nathaniel Styer in a written statement. “We are working closely with the NYPD to identify the perpetrators and we are providing the victims with support.”

The NY Daily News reported that the school was placed on lockdown after the students were attacked outside the school on Maor Road Monday at approximately 3 p.m. As one of the students was waiting for the bus, the two attackers hopped out of a blue vehicle and charged the 16-year-old teenager.

The victim was taken to Staten Island University Hospital North, where he was treated for bruises and a deep cut to the left side of his head.

The next day on Tuesday afternoon, sources stated that the school was again placed on lockdown yet again after it was reported that someone saw a teenager displaying a weapon outside the school. Police officials said there were three teenagers who were taken into custody and a gun was recovered in the latest incident.