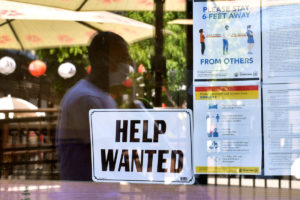 Black Americans are bearing the brunt of the disappointing job numbers for August, which shows the number of new jobs added came in significantly less than predicted.

According to CNBC, employers across the U.S. added just 235,000 in the month, despite predictions that more than 700,000 jobs would be added. The unemployment rate dropped 0.2% due to the new numbers. However, when adjusted by race, the unemployment rate for Black Americans grew from 8.2% in July to 8.8% this month.

The unemployment rates for White, Latino and Asian Americans all dropped for August. White House economists pointed the blame at the growing number of delta variant COVID cases and deaths for the low job numbers. Experts also blamed a retreat in consumer confidence for the slowdown in hiring.

Even worse is that the labor force participation rate among Black workers rose last month and is now tied with the rate for White workers at 61.6%. Basically, the unemployment rate for Black  Americans is rising despite more Black Americans looking for a job.

AFL-CIO chief economist William Spriggs told CNBC that employers are the issue, noting the unemployment rate for Black workers with at least an associate’s degree, exceeds White high school dropouts. The current rate of Black workers with an associate’s degree have an unemployment rate of 6.9%, while the jobless rate among White dropouts is 5.8%. The jobless rate for Black Americans with a high school diploma (10%) is also higher than White Americans over 25 without a high school diploma.

“A lot of people find jobs, but a bigger share of those who went out looking didn’t. So, the Black unemployment rate has been going up because employers are still passing over Black workers,” Spriggs  added. “When you look at those numbers, it’s clear employers are saying, ‘We want workers, but not exactly.’”

National and local employers have spent the summer trying to fill positions, offering everything from sign on bonuses to college tuition assistance. That has pushed more young Americans into working, but for older Americans, especially with children, they may be looking for more help including childcare options and annual pay raises.

Afghanistan: What rise of Taliban means for Pakistan