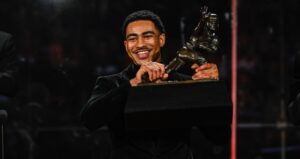 God is great! Truly grateful for everyone who made this possible and for all the support I’ve received. All glory to God! pic.twitter.com/nsFozsuXwI

“Yeah, it’s crazy,” Young said after winning the prize. “You dream of moments like that. It’s surreal for something like that to happen. You know, it was a whirlwind of emotion for sure hearing your name and then composing yourself to speak, so it was really surreal, and it was truly an honor and a blessing.”

Young led his team to a 12-1 record while winning the 2021 SEC championship and helping to gain the top seed in the upcoming College Football Playoff. He also won the Maxwell and Davey O’Brien Awards last week. To round off the accolades, Young won the Associated Press college football player of the year. He passed for 4,322 yards and 43 touchdowns on 314-of-462 passing (68.0%) in his first year as Alabama’s starting quarterback.

According to NFL.com, in his acceptance speech, Young spoke about being counted out and having to prove himself.

“I’ve always been labeled as someone who’s not the prototype, being an African-American quarterback and being quote-unquote undersized and not being that prototype, I’ve always been ruled out and counted out. People a lot of times have told me that I wasn’t going to be able to make it. And for me, it’s always been about, not really proving them wrong but proving to myself what I can accomplish.”