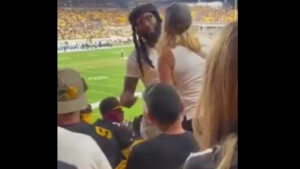 The National Football League (NFL)’s regular season hasn’t started yet but during a preseason game in Pennsylvania this past weekend, things got violent between a Black man and a white woman when a video clip of the incident went viral. Now police are investigating the disturbance.

According to The Pittsburgh Post-Gazette, during the preseason game that took place at Heinz Field in Pittsburgh on Saturday, where the Pittsburgh Steelers were playing the Detroit Lions, there was also a battle happening in the stands.

It appears in the video that the white woman hauled off and slapped the Black man in the face which escalated the disagreement the two of them were having.

Football and fans are back ? pic.twitter.com/jTwvQqYP6c

There is no footage of what transpired between the two before the interaction but you do hear someone state out loud that the white woman hit the Black man first before he reacted back to throw a punch.

Football and fans are back ? pic.twitter.com/jTwvQqYP6c

Pittsburgh police have said that they are investigating the situation and are also asking for any spectator who witnessed the incident to come forward.

The Pittsburgh Steelers have released a statement about the incident.

“We are working with local authorities and Heinz Field staff to gather more information and identify the individuals involved,” according to the written statement. “This kind of conduct is inexcusable and we will respond accordingly once more information is obtained.”

This was the Steelers’ first preseason game at home as they emerged victorious with a 26-20 win.

Everything We Know About NBA 2K22 So Far