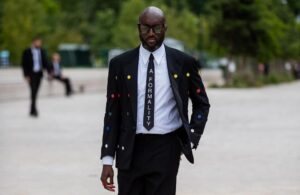 Designer Virgil Abloh, founder of high-end streetwear brand Off-White and the first Black person to helm Louis Vuitton’s menswear line, has died at age 41, his family shared via an Instagram post on Sunday.

The post reveals that Abloh had been diagnosed with cardiac angiosarcoma, a rare heart tumor which, according to Johns Hopkins Medicine, can restrict both the inflow and outflow of blood to and from the heart.

“He chose to endure his battle privately since his diagnosis in 2019, undergoing numerous challenging treatments, all while helming several significant institutions that span fashion, art, and culture,” reads the family statement.  “Through it all, his work ethic, infinite curiosity, and optimism never wavered. Virgil was driven by his dedication to his craft and to his mission to open doors for others and create pathways for greater equality in art and design.”

After meeting the rapper formerly known as Kanye West when the two interned for Fendi, Abloh rose to prominence through several high profile collaborations, including serving as the artistic director for Watch The Throne, Ye’s collaborative album with Jay-Z. Abloh would go on to serve as creative director of the rapper’s creative agency DONDA before taking the fashion world by storm with his first brand, Pyrex Vision – a company which daringly reimagined deadstock Ralph Lauren clothing.

In 2013, Pyrex Vision became Off-White, a luxury Italian fashion house which has collaborated with brands including Nike, IKEA, Jimmy Choo, Warby Parker and many more. He joined Louis Vuitton in March 2018, becoming one of the few Black designers at the helm of a legacy fashion house.

In 2019, Abloh’s work was celebrated with a traveling art exhibition called Virgil Abloh: Figures Of Speech. In each city where the exhibit was shown, he also discussed his education, career and views on fashion in a fireside chat.

Last year, the artist and designer established the Virgil Abloh “Post-Modern” Scholarship Fund, a partnership with the Fashion Scholarship Fund “to foster equity and inclusion within the fashion industry by providing scholarships to students of academic promise of Black, African-American, or African descent.”

In July of this year, the designer’s parent company Louis Vuitton Moet Hennessy announced that it had acquired a 60% stake in Off-White.

“We are all shocked after this terrible news,” LVMH CEO Bernard Arnault said in a statement on Twitter. “Virgil was not only a genius designer, a visionary, he was also a man with a beautiful soul and great wisdom. The LVMH family joins me in this moment of great sorrow.”

LVMH, Louis Vuitton and Off White are devastated to announce the passing of Virgil Abloh, on Sunday, November 28th, of cancer, which he had been battling privately for several years. pic.twitter.com/CytwZLvSFu

Abloh is survived by his wife of twelve years, Shannon, their 8-year-old daughter Lowe and 5-year-old son Grey.

His passing has also left a legion of celebs and fans in shock and mourning, many of whom took to celebration to express their sadness just minutes after the announcement.

Damn. Gutted. @virgilabloh is gone. He just texted me a few days ago… still —just a week ago— pushing me to focus on passion. The world lost an amazing talent today. I had no idea what he was fighting. Please don’t squander your time. I’m trying to do better myself. pic.twitter.com/RRQmCtUGPf

Just a year after Chadwick, Virgil Abloh, another influential Black force, has been taken from us due to a private cancer battle. The resiliency these men must have had to deal with such difficult situations in complete silence, working all the way to the very end. Devastating.

The 'Weight' Is Over! 5 Cyber Monday Deals To Help You Shed Pounds