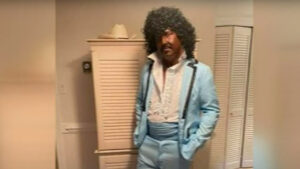 A politician based in Virginia has apologized after receiving considerable backlash for taking a photograph of himself posing in blackface.

According to NBC 12, Warsaw councilman Faron Hamblin posed for a picture in blackface as one of Eddie Murphy’s Coming to America characters. The white politician had posted the offending photo on his Facebook account over the weekend with the caption, “In honor of my late friend, I went out as the legendary Randy Watson tonight. Give it up for my band Sexual Chocolate.”

After the photo was deleted, he apologized for offending anyone who thought it was inappropriate. He then claimed that he didn’t think there was anything wrong with wearing dark makeup. He expressed in a Facebook post that he hurt a lot of people and he did not intend to do so.

His post was flooded with comments and reactions.There were also many who felt he should not have had to apologize for posting the photo in the first place.

According to reports, Hamblin wrote another statement pertaining to the original post, which he later deleted as well.

“Folks I made a post of me dressed like the movie character Randy Watson. For those of you who know the movie, Randy is a [B]lack man. So I dressed the part. Suit, hair, and yes my makeup was brown. Many saw it degrading, which I did not. I did it to show my love for the character and the movie. But since I’m white it’s considered by some as offensive to dress as a black person.”

Hamblin continued by comparing himself to Black comedian Dave Chappelle, who has recently been vilified by leaders in the LGBTQ+ community for the commentary toward members of the that population in his Netflix special, The Closer.

The councilman said that.” like Murphy and Chappelle, he doesn’t go around “walking on eggshells, worried about hurting someone’s feelings. But I never intended for this to be a racist issue.”