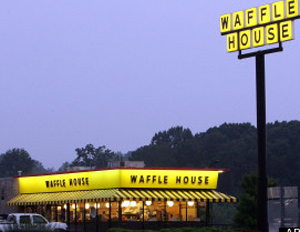 In Missouri, a Waffle House is issuing an apology after a Black couple says they were discriminated against and denied service.

Jimmiecia Benit says she and her wife tried to dine in at the 24-hour breakfast chain in St. Charles City, Missouri—but a server told the couple they had to take their meals to go instead.

”Before we can even get in the door, an employee goes, ‘you can only do to-go orders. We’re not taking dine-ins,’” Benit explained to KMOV,  “We were dressed nice, came in properly, not loud, but as soon as we got to the door, no, only to-go orders.”

Initially, the couple believed the restaurant was following COVID-19 guidelines. But the couple began to notice white patrons coming in after them and allowed seating.

In a recording, the server tells the couple, “I am the only server here, and I am trying to catch up from the last shift. So, I have my own reasons for telling you this.”

The vice president of Waffle House has since responded, saying the situation was investigated and there was “very poor customer service.”

Benit claims the server waited on people of diverse backgrounds earlier in her shift and explained the restaurant remains short-staffed because of COVID–19.

“We really are deeply sorry that we have two customers who had a bad experience with us and left feeling very unappreciated,” Njeri Boss, a vice president of Waffle House, said.

Benit now has retained an attorney and calls the experience “really degrading and humiliating.”

This is not the first time Waffle House has been accused of racial discrimination. In 2018, a Black woman in Pinson, Alabama, claimed a Waffle House server told her the restaurant was closed when white patrons were dining inside.

Another discrimination incident in 2018 involved a video showing a Black couple being handcuffed after a dispute over the cost of a meal and a glass of orange juice at a Waffle House in Florida.