A series of twisting walls made from local brick form partitions that separate the living spaces within this house in the Indian city of Trivandrum.

Local architecture office Wallmakers designed the Pirouette House as a tribute to British-born Indian architect Lawrence Wilfred “Laurie” Baker, who promoted the revival of regional building practices and the use of local materials such as brick.

The house is situated on a compact site in the capital of the southern state of Kerala. It is surrounded by other properties, which led the architects to design an inward-facing building with spaces arranged around a central courtyard.

Wallmakers based the house’s construction on a bricklaying technique – the rat-trap bond – used by Baker, who created several buildings in Trivandrum that demonstrated a pioneering approach to sustainable and organic architecture.

The rat-trap bond is a way of laying bricks at right angles to create a cavity in the wall that helps increase thermal efficiency and reduce the volume of bricks required.

At the Pirouette House, Wallmakers adapted this technique to create curved walls that provide enhanced structural performance as well as concealing structural components and service ducts.

“The idea was further developed to form a series of slanting walls that dance left and right, converging only to support the ferro-cement shell roof,” the architects explained.

“Each staggered wall has been tailor-made to suit the issue of deficiency in space that this residence posed, aiming to create larger volumes and a feeling of privacy.”

The twisting brick walls create attractive shapes that seem to gently envelop the different rooms within the house. Protruding bricks produce patterns of light and shadow on the surfaces, which didn’t require any additional finishing.

The project’s use of kiln-fired brick also supports a local industry that is in danger of collapsing, as construction firms typically favour machine-made brick. 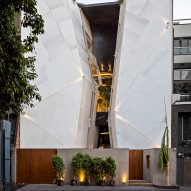 Baker was known for salvaging and reusing waste materials, and for this project metal scaffolding pipes used during the house’s construction were repurposed to form the treads of the main staircase, as well as for screens incorporated into several openings.

Scaffolding planks were reused to form part of the living room’s floor, and locally sourced cane has been woven around metal poles to create screens and furniture including chairs and a sofa.

The building’s floor slabs and roof are made from ferro-cement, which combines cement with steel reinforcing bars that allow for much thinner profiles and therefore less material than an equivalent structure made from reinforced concrete.

The house features a sheltered carport and entrance area that incorporates bench seating, with curving steps leading up to the front door. Inside, the ground floor contains an open living area with a sunken courtyard positioned beneath the staircase.

The kitchen is situated to the rear of the space and features a cantilevered dining table that projects out into the living area. A bedroom with an en suite toilet is also accommodated on this level.

The staircase ascends to a landing that provides an informal lounge area. Two further bedrooms, including the main suite, are located on this level, along with a terrace that looks out across the surrounding neighbourhood.

Wallmakers was established by architect Vinu Daniel in 2007 and was named after its first project, which was a simple compound wall.

The studio has subsequently focused on creating buildings using natural materials including earth, as well as reusing discarded materials in its low-cost, eco-friendly projects.

Elsewhere in India, Anagram Architects created this home which was split by a full-height atrium while Studio PKA built a home in Alibag with brick-lined interiors.

Photography is by Jino Sam.

Can I Make My Husband Pay Me for $150K Gambling Loss?