The news that WarioWare was returning and making its debut on the Nintendo Switch was met with enthusiasm from fans of the series’ zany pedigree of “microgames.” The franchise’s long-running gimmick of throwing marathons of these simple games that take less than a few seconds to complete has resonated with players since its Game Boy Advance debut in 2003. Now, Wario and his friends are back with more microgames for players to complete and several interesting twists to the WarioWare formula.

When you load into WarioWare: Get It Together’s main menu, you see options for Story, Variety Pack, Play-o-pedia, Wario Cup, Crew, Missions, and Local Wireless. From the onset, it seems like this WarioWare has a good amount of meat on its bones, and as soon as my demoist dives into the myriad menu options, my impressions are confirmed. 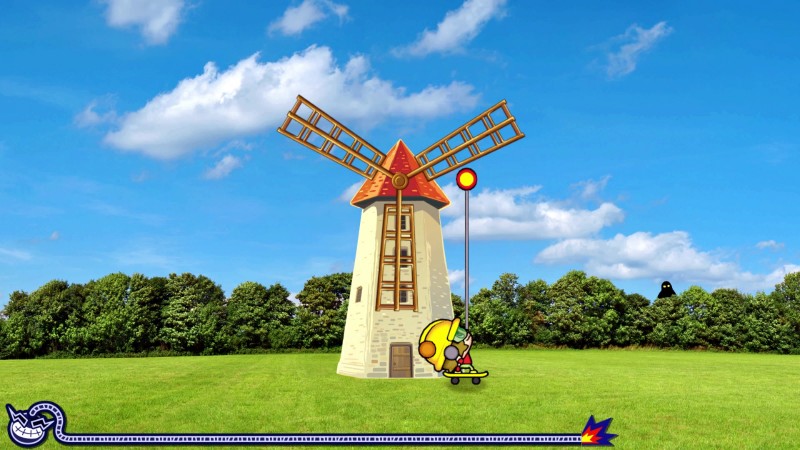 My demo starts in Story mode, which delivers the traditional WarioWare experience. Here, you follow Wario and his crew after they release their latest game. Unfortunately, something goes wrong, and they all get sucked into their own game. As you play through Story, you encounter different characters from Wario’s team as they play through the game’s themes. For example, Dribble and Spitz’s theme is fantasy.

Story mode can be enjoyed by one or two players. When you enter Story mode, you select a character to play as, plus a party of characters. Depending on the theme, you get the opportunity to use this party in certain circumstances. For example, in the demo released on the Nintendo eShop last night, you rotate through the characters as you play through the microgames. Once you start going through a Story sequence, it’s the same WarioWare players know and love: The game throws tons of bite-sized microgames at you with minimal time to react to the instructions that flash on the screen, figure out how to play the microgame, and complete the objective. If you’re playing cooperatively, you have the added chaos of figuring out which character you’re controlling, how that specific character controls, and how to best use your character’s specific abilities to solve the microgame. 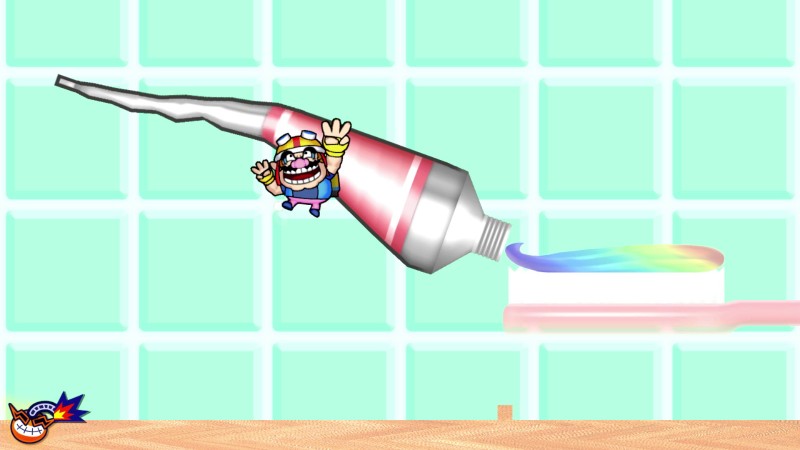 While all the microgames I saw in Story mode are housed in one section, the diverse collection and wild material fit right in with WarioWare’s history. In one game, the players have to lure an octopus into a cage, then close the door behind it, while in another, the players need to give a floating plant man a high-five. The Story section culminates with a boss stage; in this case, you need to protect a character from tentacles long enough to earn a key, then use the key to open the gate and push the character into the escape area. It’s a strange concept, made even more unique by introducing the various characters’ special abilities. With more than 200 microgames included in the WarioWare: Get It Together package, I’m excited to see just how unique they get.

After the boss stage, we back out of Story mode and jump into Variety Pack. This mode serves as a hub for party-style minigames. These games operate as longer-form explorations of WarioWare: Get It Together’s mechanics. In Daily Grind, which supports one to four players, you traverse through side-scrolling stages with obstacles, enemies, and collectibles using the game’s various characters. Each time you get a power-up, you change to a new character, keeping the experience fresh and earning bonus points. Because the characters have unique abilities, you never know what you will get when you swap to a new one. For example, Dribble can blast enemies so they don’t hit him, while Dr. Crygor can swim and charge through the air. If one player gets KO’d, they don’t finish the day or deposit their points, but they respawn at the start of the next level. 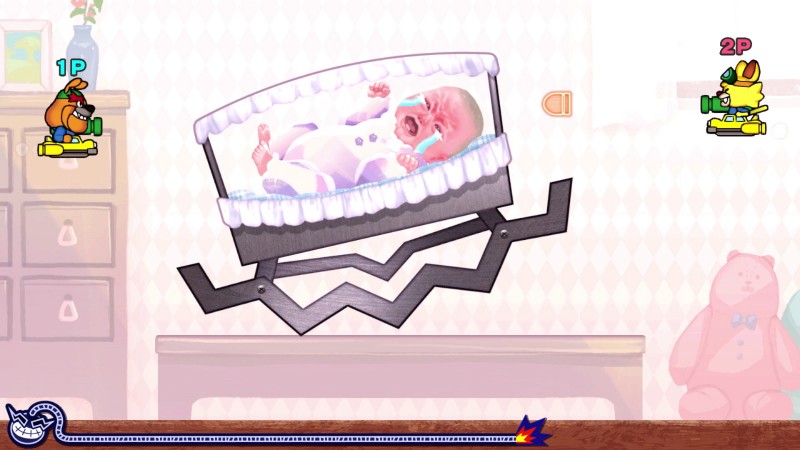 The other Variety Pack game I see in action is Puck ‘er Up. This game, which is made for two to four players, is a twisted version of air hockey that incorporates WarioWare’s microgames each time someone scores. If you manage to get the puck in a goal using your character’s abilities and moves, you are transported into a microgame while the other players do their best to disrupt you from outside the game. Though the scoring player is the only one in the microgame, the other players can attack the smaller screen you’re on by shaking, rotating, or squishing it. The disruptions are almost too effective, sometimes making the microgame impossible to see, but it’s definitely in line with the over-the-top nature of the rest of the package.

While I don’t necessarily go to WarioWare for longer-form gameplay like Variety Pack, the games all feel in line with the original WarioWare spirit. I’m excited to try these games for myself, but for now, they look super fun, even if I anticipate spending more time with the standard WarioWare modes. 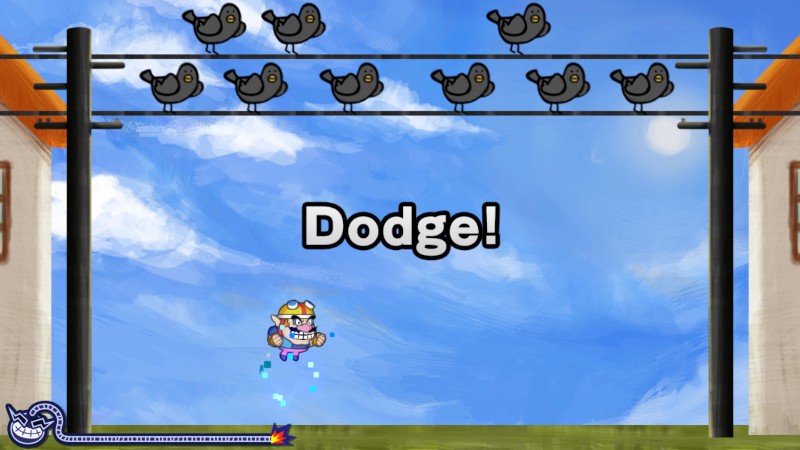 In Play-o-pedia, you can access information on all the microgames you’ve encountered, as well as get hints on where to go to find new ones. You can also replay them in rapid-fire fashion. My demoist selects High Tech, a microgame where the two players must navigate a short platforming maze to reach the roof and escape in a helicopter. When you choose your character, the game tells you how suited for that specific microgame the character’s abilities are. Then, once you enter the mode, you repeatedly play the same microgame to see how fast and difficult the game can get before failing. This mode seems like a lot of fun and a great way to master microgames you struggle with.

In Crew, you can see and interact with all the characters on the WarioWare roster. You can enter practice courses with each character to better learn their movements and abilities and customize your favorites with cosmetic colors. This mode also lets you gift presents, which are purchased using earned Wario Coins, to characters. If you give the right character a present they like, they can become more powerful. 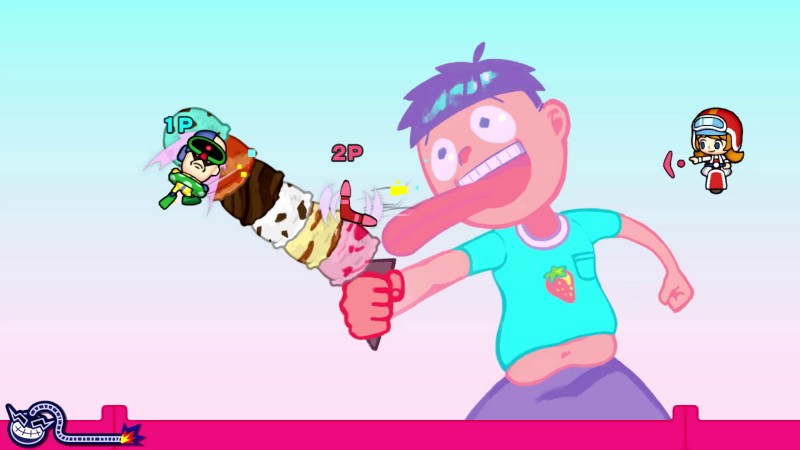 WarioWare: Get It Together rounds out with Wario Cup and Missions. Wario Cup lets you play competitively to get the highest score possible, then upload your highest score to a leaderboard via a ranked mode. Once in the leaderboard, you can compare your score globally or against friends. I didn’t learn too much about Missions, other than they are another way to earn the in-game Wario Coin currency, so while I think they are side goals that you complete while you play, I can only speculate at this point.

While I didn’t have a chance to play WarioWare: Get It Together, seeing it in action made me recall all the fond memories of playing my favorite games in the series like Mega Microgame$, Touched, and Smooth Moves. I can’t wait to see just how chaotic the multiplayer can truly get when WarioWare: Get It Together releases for Switch on September 10.

Random: You Can Play Super Mario 64 Via The Xbox's Web Browser