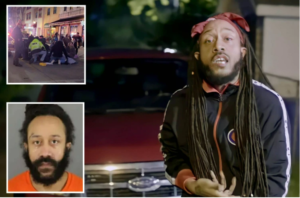 After being charged with 5 counts of homicide in a tragedy that happened at a Christmas parade in Wisconsin last week, prosecutors announced that a 6th victim passed away as the suspect appeared in court for the first time to face the judge.

Darrell Brooks has been charged with five counts of first-degree intentional homicide. The prosecutors in the case also announced that a sixth victim has passed away. It is expected that another intentional homicide charge will be added within a week. Over 40 people were also inured during the tragic incident.

According to NBC News, the man who is accused of driving his car into a crowd at the Waukesha Christmas Parade appeared in court on Tuesday.

Brooks arrived in court in shackles and appeared to have been wearing a bulletproof vest.

Footage from a doorbell camera before Brooks is arrested shows him pleading for help and telling someone at a residence that he was waiting for an Uber to arrive to pick him up.

The video shows police officers arriving at the home in Waukesha and telling the 39-year-old Brooks to put his hands up.

According to NBC News, Brooks had an extensive criminal record, which included arrests for sexual abuse, cannabis possession, battery and domestic abuse. Those crimes factored into the decision to set the cash bail at that high of an amount.

His bail was set at $5 million.

Waukesha County District Attorney Susan L. Opper said: “There’s a long history of flights, obstruction, bail-jumping-type behavior, your honor. It’s remarkable that these are violations all around the state of Wisconsin.”

Brooks is expected to appear back in court on Jan. 14.

One Finance Pays You Interest 50 Times the National Average