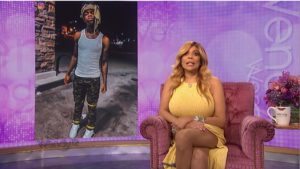 The latest news coming from The Wendy Williams Show camp is that the controversial talk show host won’t be making a return until February 2022—at the earliest.

Last month, the show’s producers were saying that Williams was on her way to recovery and would be back on the talk show soon. The show was on hiatus after Williams had health issues related to Graves disease and coronavirus. After having the show’s season debut postponed three times, producers decided to premiere the show with guest hosts until Williams was well enough to return.

The latest Instagram post from the show listed several guests through January, leading to speculation that viewers won’t see Williams in the hot seat until at least February. In the meantime, the list of hosts who will start the next calendar year are:

Last month, while there have been guest hosts filling her slot on The Wendy Williams Show as she recovers, rumors swirled that the talk show host was in a wheelchair and may be dealing with the early effects of dementia.

However, her brother Tommy spoke with The Sun to refute the talk surrounding his sister’s mental health.

Three months ago, the show’s official Instagram account revealed Williams had tested positive for COVID-19. TMZ also reported that Williams voluntarily admitted herself into a New York City hospital for a psych evaluation. The hospitalization came after the talk show host’s COVID diagnosis was confirmed. At the time, Her brother, Tommy, gave her fans an update on his sister’s condition, letting them know she’s pushing through.