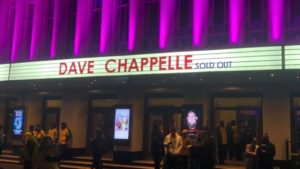 Despite the ongoing controversy surrounding his Netflix special, Dave Chappelle closed out a six-night run in the U.K. with a sold-out crowd in London on Oct. 20.

The comedian hit the stage at the Eventim Apollo theater, which has a capacity of 3,500 people, at almost the exact moment a group of Netflix employees staged a walk-out in protest of the streaming platform’s unwavering support.

According to Variety, tickets to the show ranged between $100-$300 and, as has become the norm at Chappelle’s live shows, cell phones and cameras were not allowed in the building. While none of the attendees would speak to whether or not the former Comedy Central star addressed the controversy, several did state that Chappelle announced he planned on taking The Closer on tour. He allegedly insinuated he would be scheduling screenings in 10 U.S. cities if the show were to get pulled from Netflix, which is unlikely.

Earlier this week, the company’s CEO Ted Sarandos said that while he acknowledged some missteps on his part in the way the internal backlash was handled, he stood by the company’s decision not to pull the special. A rep said last week that Chappelle, who has yet to issue a formal statement about the blowback following The Closer is open to dialogue with the group of Netflix employees who have voiced concerns about what they perceive as trans-phobic content in his more recent work.

In the UK, the response from fans was mixed. One fan, who said he purchased his $150 to the show long before The Closer was released on Oct. 5, told Variety that the special was “controversial, but it wasn’t good.” Another couple commented that they found nothing offensive about the special.

“Well, we’re gay, we’re lesbians,” one Black woman said to Variety, speaking of herself and her partner. “We’re a couple and we think it’s fine. We don’t think he’s being rude or hurting anyone or being disrespectful. I don’t think that he’s homophobic or anything like that.”

Chappelle’s team has not confirmed the alleged screener tour.