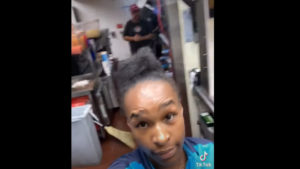 A white manager at Wendy’s was caught on video berating a Black woman cashier in a nasty tirade and calling her a “‘communist f****** b*tch.” As a result, the woman was suspended for recording the video and sending it to upper management.

However, after the video of the confrontation went viral, Wendy’s changed course and fired the white manager, TMZ reports.

The Black woman, Sophia Cargill from Kalamazoo, Michigan, posted the video on TikTok and Instagram under the handle @mon3adatmac. As you can witness in the video clip below, she filmed the video to report the hostile work environment she had to endure.

Cargill created a GoFundMe account asking for donations to help her out while she decides if she will pursue legal actions since she was suspended without pay. She has raised approximately $13,000 out of the $25,000 she is requesting.

On July 28, after recording and then posting the video to her social media accounts, Cargill posted a message on her Facebook page asking for assistance in the matter.

“I’m being harassed at work I need help from the community to report this man to Corporate the number is below please help put an end to this the other two photos are there is to show you no one wants to work at Wendy’s on Gull Road. Two managers have quit. I’m A GM in trading the man in the pictures is the Assistant store manager please let’s help end this type of harassment and toxic workplaces!! The video is on my page”

According to TMZ, a Wendy’s spokesperson responded to the incident by stating, “We have no tolerance for harassment in the workplace. Upon learning of this situation, we acted immediately following our protocols and suspended those involved to run a thorough investigation.”