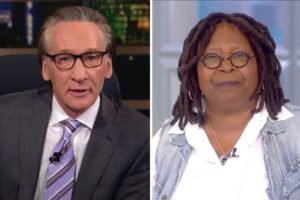 Check the facts! Whoopi Goldberg schooled Bill Maher on race and the country’s ongoing history of racism on Monday’s episode of The View.

Over the weekend, comedian Maher criticized the NFL for playing both the national anthem and what’s considered the Black national anthem at Thursday night’s season kickoff game between the Tampa Bay Buccaneers and the Dallas Cowboys. He called the move “segregation” under a different name.

During an episode of Real Time with Bill Maher, however, the Emmy winning host condemned the NFL for allowing both national anthems to be played at the season’s kickoff, saying that we “should have one national anthem,” Decider reported.

“I think when you go down a road where you’re having two different national anthems colleges sometimes now have…many of them have different graduation ceremonies for Black and white, separate dorms. This is what I mean! Segregation! You’ve inverted the idea,” Maher continued. “We’re going back to that under a different name.”

Maher also used the opportunity to indirectly attack critical race theory, which he believes is being placed in school curricula “pitting students against each other by the color of their skin,” likely referencing CRT.

Goldberg was less than amused by the comments. The EGOT winner took the time to offer Maher a little history lesson during a segment on The View.

“You cannot say this is happening because people are woke. I’ve never been asleep,” she continued. “In the culture that I’ve seen, we are fighting because there’s a big gap. Not just us, Native Americans, all the ‘other’ we’ve been talking about. America, get it together! We already dealt with this.”

Following years of calling for the NFL to support racial justice and its Black players, the NFL eventually responded to the nation’s protests over the murder of George Floyd by adding the  “Lift Ev’ry Voice And Sing,” anthem before its games.

According to a New York Times report, in response to the anthem’s popularity, the league will make both anthems a permanent part of their games.