Speaking live from Rotterdam on day two of the Dezeen 15 digital festival, Winy Maas of MVRDV will describe his vision for a new layer on the Earth’s surface that will allow both humans and nature to thrive. Watch live at 4:30pm London time today.

Maas will explain his concept of The Sponge, which he proposes in a manifesto written for Dezeen’s 15th birthday festival.

This would take the waste generated by humans during the Anthropocene era and turn it into an inhabitable biostructure.

“The idea of the Anthropocene has captured people’s imagination in recent years – the idea that humans have created a new layer in the geology of the Earth,” Maas wrote in his manifesto.

“What if we started to think of these new geological layers as a design challenge?” 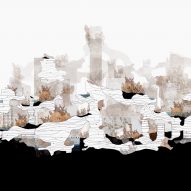 “What if we create a new layer on the Earth that incorporates growing human habitation and consumption?” asks Winy Maas

“Instead of waiting for a result of human habitation, what if we create a new layer on the Earth that incorporates growing human habitation and consumption, while acknowledging humanity’s current dominance, balancing its effects and combining that with natural development?” he added.

Dutch architect Winy Maas is co-founder and director of Rotterdam studio MVRDV and head of The Why Factory, a research laboratory and think tank he co-founded with the Faculty of Architecture at Delft University of Technology.

Dezeen 15 is a three-week digital festival celebrating Dezeen’s 15th birthday. Each workday, a different architect or designer will present a manifesto setting out an idea that could change the world over the next 15 years.

The portrait of Maas is by Barbra Verbij.

What Are Parsnips? - Spend With Pennies