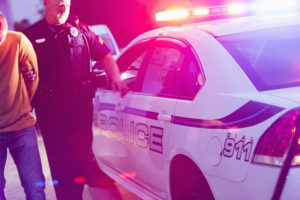 The Caledonia Police Department in Wisconsin is in the news and not for protecting and serving.

On Friday, a video went viral after a Facebook user called GlockBoy Savoo seemed to show an officer who chucked something into his back seat.

In the video, reportedly taken July 21, the officer can be seen approaching the back seat of the car where the door is already open. Viewers can also see something small and white travel through the air into the open car door.

GlockBoy Savoo, thinking quickly, immediately inquires what the officer just threw into his back seat. The officer feigns cluelessness and GlockBoy Savoo turns to the back seat where a small plastic baggie filled with an unknown substance is resting.

On Facebook, GlockBoy Savoo posted about the experience and claimed that it was the officer’s attempt to have a reason to search his vehicle.

“First time ever seeing a cop try to throw sum on me just to get reason to search the car? he ain’t even know I was recording ? you can tell he was nervous ?.”

The Caledonia Police Department initially confirmed that the officer in the video is indeed one of theirs and the traffic stop did happen but issued a statement of their own basically asking the public not to believe that snippet of the video and promised an investigation.

“Please keep in mind that the cell phone video that is circulating depicts only a small portion of the entire encounter; whereas, all available video may provide more context,” said Police Chief Christopher Botsch.

However, their statement grew legs and by Sunday, Fox News reported an extended account by the police department about what they say really happened.

According to Botsch, an officer searched another passenger and found the plastic bag on that passenger’s person. Since the bag was empty, the officer threw it into the back seat of the car.

“Since there were NO DRUGS in the corner tear, the officers discarded the empty packaging material in the vehicle,” the Botsch wrote. “This is what was observed in the video.”

Civil Rights attorney Ben Crump took to Twitter and called it a clear case of police abusing their power.

Caledonia PD Ofc. Mathew Gorney captured on video tossing a clear plastic bag into a Black driver’s vehicle. Caledonia PD has launched an investigation into the incident; however, this is a CLEAR example of police abusing their position of power! pic.twitter.com/3K2eRyzM7E

The Caledonia Police Department used footage from their officers’ bodycams to draw these conclusions during their investigation of the incident.

Possessing an empty baggie is not illegal. No arrests were made in the incident and the driver was issued a ticket for speeding.