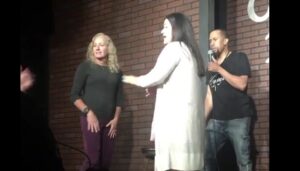 Actor and comedian Affion Crockett had his performance interrupted on Saturday night when a woman took to the stage to complain about his “offensive” jokes.

The confrontation took place during Crockett’s set at The Comedy Zone in Jacksonville, Fla., after what seems to have been a joke or series of jokes about sex. In a video posted to the comedian’s Instagram page, the woman is seen on stage with Crockett as another woman appears to try to talk her down.

When he turns to the heckler to ask what the issue is, she replies, “I am a woman and I’m married to a man. But you’ve offended a lot of people here tonight!” The crowd immediately boos the woman, and as Crockett addressees her directly, security joins them on stage to convince her to return to her seat.

“See, white people be thinking they can do whatever the f— they want: storm the Capitol or storm my God d— stage,” he says as the woman is escorted off stage by a Comedy Zone staffer.

Several celebs including Questlove, Holly Robinson Peete and Yvette Nicole Brown, commented their support of Crockett in this situation, with many congratulating him for his professionalism and restraint.

But it was Sharon Stone whose response resonated with the most fans, garnering over 5,000 likes and over 100 replies.

“I so don’t understand WHY anyone comes to anyone’s show and then complains about the content,” the actress replied under Crockett’s post. “DONT COME . You’re coming is arbitrary : the art is not about YOU , it’s about the ARTIST ; if YOU DONT LIKE IT : GO HOME . it’s ENTERTAIMENT not your ideaS 💡 DUH.”

First introduce to audiences on Def Comedy Jam in the 90s, Crockett has appeared in a variety of projects, from Curb Your Enthusiasm to CSI: NY to Black-ish.