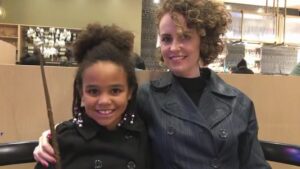 A little Black girl travelling with her mother following a death in the family was further traumatized when they were questioned by police following their Southwest Airlines flight.

Shortly after learning about her brother’s death on Oct. 22, Mary McCarthy flew from Los Angeles to Denver with her 10-year-old daughter Moira. Upon landing McCarthy says she was approached by two Denver Police Officers and a Southwest employee: a flight attendant had flagged her and her daughter as “suspicious” and reported her for human trafficking.

According to NBC News, the flight attendant was concerned because she says the mother and child were the last to board their flight and asked other passengers to change seats so that they could stay together. The employee also told authorities that she heard McCarthy tell Moira not to talk to the flight crew.

“They said, ‘We’re talking to you because you and your daughter were reported for suspicious behavior,’” she recounts. “That’s when everything clicked in my brain. I’ve been a mother to a biracial child for 10 years, I’m aware of racial profiling.

“Throughout the encounter, my daughter was sobbing,” McCarthy added,  “and I told them, ‘Look, we’re traveling for a death and she’s a Black girl who’s 10 but looks much older than she is. She unfortunately already has had charged encounters with police. Any kid’s going to be scared in a situation like this.”

Eventually, both the Southwest staffer and the responding officers recognized they had made a mistake and let the McCarthys go. The police report indicated the incident was unfounded.

Still, two weeks later, McCarthy says she received a phone call from Denver Police’s human trafficking unit who said they were following up on the incident at the airport.

She says that her daughter is now ““deeply traumatized by the assumption that just because we don’t have the same skin color we’re involved in a very serious crime.”

McCarthy, who has yet to hear from Southwest abut the incident, has hired an attorney to investigate what legal recourse she may have.