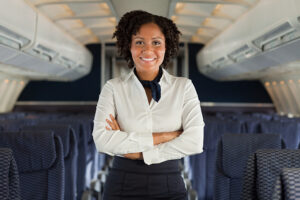 Delta Air Lines says its U.S. workforce is growing in diversity but is still working to close racial and gender gaps in its leadership positions.

According to Delta’s 2021 Close The Gap Report, there has been a slight increase in Black workers in personnel and management positions. The report’s numbers are based on Delta employees in the U.S., U.S. Virgin Islands, and Puerto Rico.

Black workers account for 23.8% of the air line’s personnel, including baggage handlers, customer service representatives, and flight attendants. Black representation in high-level management positions increased slightly from 8.4% in the first quarter of 2021 to 8.7% in the second.

“A picture of equity says that your leadership should look more like your front line, and our front line is extremely diverse,” Johnson told the Atlanta Journal-Constitution.

However, when it comes to the 100 most senior executives, diversity hasn’t been growing. According to Delta, Black representation in senior roles dipped from 7.3% to 7% between the first and second quarters. The airline’s corporate board, which has two Black representatives, also remained unchanged between quarters.

Female representation in front-line positions saw a 1.2% increase and a 0.9% increase in its officer positions. However, the gender gap in these positions remained largely unchanged.

Like many other national, international corporations, Delta made pledges to increase employee diversity amid the Black Lives Matter protests and the deaths of Breonna Taylor, George Floyd, and Ahmaud Arbery.

Delta was among the first companies to receive pandemic aid. The airline received more than $5 billion during the pandemic to the Independent. The site also reported Delta contributed more than $180,000 to former President Donald Trump’s reelection campaign.