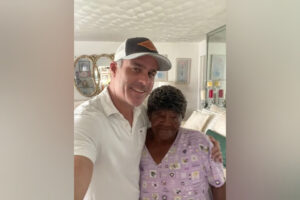 More than 20 years ago, an older woman named Gladys transposed the area code to her daughter’s Maryland phone number and ended up calling a man in Rhode Island.

After getting calls from Gladys a few more times, the man, Mike Moffitt, decided to strike up a conversation.

“Her daughter lives in Maryland (area code 410 vs. 401). She kept calling, saying, OMG, I have the wrong number and would hang up quick,” Moffitt wrote in a recent Facebook post. “I finally stopped her before she hung up and said, hey, if we’re gonna talk like this, we might as well get to know each other. We’ve talked every few months for the last 20 years in the most bizarre but normal way.”

The two became so close that when Gladys’ husband passed away, she asked her son to call “Mike from Rhode Island” to share the news.

Over the years, Moffitt tells the Providence Journal that he and his family periodically stayed about 45-minutes away from Glady’s Delray Beach, Florida, home. But he never felt like the time was right for a visit.

Last week, as his family returned to Florida for Thanksgiving, he realized that he had ventured even closer to his friend’s home as a college tour brought him within less than three miles from Gladys.

Not wanting to worry her about preparing her home for guests, Moffitt simply drove to the house.

“I brought her flowers for Thanksgiving and finally got to meet,” he said in the now-viral Facebook post. “Didn’t tell her I was coming, and her daughter walked me through the door. I announced, ‘I’m Mike from Rhode Island!’ and the first words out of her mouth were ‘I’m blessed!!’”

While Moffitt says he didn’t stay long, not wanting to get in the way of Gladys’ Thanksgiving preparations, he was happy to share a hug and take a photo with his longtime friend.