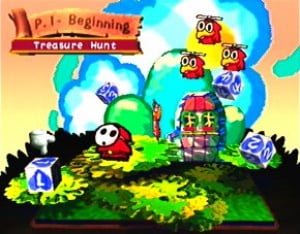 There’s a lot to love about Yoshi’s Story. The presentation is gorgeous, the mechanics are solid, the music is fantastic, and seeing a bunch of Yoshis wandering about remains adorable throughout the campaign. Unfortunately, the game is held back — at least for veteran gamers — by oversimplified platforming, design that’s clearly oriented towards young and inexperienced players, and an exceedingly short campaign.

You start out playing as one of six different coloured Yoshis, and your mission is… to become happier, and rescue the Super Happy Tree. Yeah. These six core Yoshis behave the same except for some small scoring advantages when eating certain colour fruit, but you can unlock a black and white Yoshi that has a number of advantages over its colourful counterparts. Your objective is to collect 30 fruits contained throughout each level to advance through a storybook and eventually find your stolen Happy Tree. 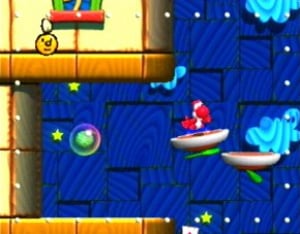 Starting off with the positives, core gameplay remains fun throughout despite lacking challenge. It’s a pleasure to march around as Yoshi, popping balloons and bashing enemies by firing eggs. In addition to tossing around one of up to six eggs in tow, Yoshi can perform a small flutter at the end of his jump, allowing him to extend the length and height to a modest extent. It’s a really neat formula (long since established in Yoshi games) that diverges from what you might expect in a platformer.

The game is absolutely beautiful. At the time it proved that the N64 could do more than jaggy polygonal figures and muddy corners, and Yoshi’s Story used the extra power of the console to produce backgrounds and enemies that burst with colour and textures, almost like they’re popping off the screen. Of course, it has aged and it’s not going to hold a candle to more recent efforts such as Yoshi’s Woolly World or Yoshi’s Crafted World, but it was special for its time and still looks good. Even if you have to squint a bit. 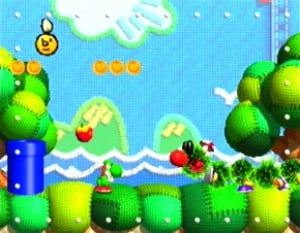 It also oozes charm. The textured environments are brought to life with bright and vibrant colours, and enemies are designed in a soft, shaded manner that pleases the eye. The presentation of the overworld through the use of a storybook perfectly matches the tone of the rest of the game, as does the melodic nursery-friendly music. It’s obviously aimed at youthful players who have little to no experience playing games, which makes for a lacklustre experience if this isn’t your first rodeo. In fact, the dashed hopes of SNES gamers who expected this to be Yoshi’s Island 2 are probably the main reason why Yoshi’s Story isn’t remembered more fondly.

Nintendo usually does an excellent job of balancing games to provide an enjoyable experience for newcomers as well as seasoned veterans, but from the beginning it’s clear what direction the company chose with this entry. Hitting one of the first explanation boxes provides the player with the valuable information that you press “Start” to see a menu. Thanks, game! Yoshi’s Story doesn’t respect the intelligence of the player, content to hand absolutely everything to you on a silver platter.

At least this approach is consistent. You can beat the game by clearing six short stages. Yes, there are extra things you can do to add to the experience, such as collecting fruit in certain orders to increase your score or hearts to open up other optional levels, but it’s still a bare-bones experience. You progress across six “pages” of the storybook, and though you start off by completing just a single stage in each page to reach the end, you can play through subsequent times to visit up to four stages on each page. It’s light content as well as tone. 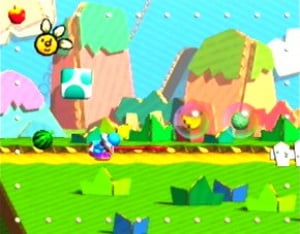 If you’re a player who likes to quickly fly through games and get to the end — one who doesn’t enjoy finding collectibles and replaying games — you’re going to finish this game in very short order and almost certainly be disappointed. Those who like to take their time will find more to like here, as the levels are structured in a way that encourages exploration. The stages aren’t completely straightforward and linear, and you must employ strategy to achieve higher scores. Some of the hearts necessary to unlock levels can take longer to locate, though the game insists on providing you with obvious clues for many of them through the interjection of Poochy, who occasionally appears and points to where you need to go to find a “secret.”

Yoshi’s Story tells a bare-bones story against a brilliantly colourful backdrop, utilizing some novel platforming mechanics to bolster interest but ultimately falling a little flat in execution. It doesn’t approach the level of its classic predecessor on the SNES, but fans of the series might want to take a visit to relive those days of yore. It’s lighthearted fare and pleasant enough — just make sure to hold your expectations in check.