Among the new releases this week, you’d be forgiven if you missed Young Souls. Here’s why you probably haven’t given it the time of day: the game is a timed Stadia exclusive. Don’t close this tab! The game is coming to other platforms this fall. I can’t wait for that day to come because I’m several chapters into the game and having so much fun that I’m upset you can only play it on Stadia right now.

At its core, Young Souls is a two-player beat ‘em up in the vein of Streets of Rage or Scott Pilgrim vs. The World. It’s also got RPG-style progression and a dungeon-crawling structure. As two orphaned twins, Jen and Tristan, you’re living a mundane life with your adopted father, a kooky scientist, in a small town. What isn’t boring is that your father figure has been abducted by “gobbons” (basically goblins) and taken to a fantastical underground world. Since Jen and Tristan are rebellious teens, they’re more than happy to pick up a sword and battle through floors of dungeons to rescue him.

Young Souls’ slick presentation was the first thing to win me over. Its animated, construction paper-ish art looks awesome, and I especially love its dramatic camera angles during cinematics. It’s definitely one of those games that looks better in motion. I’m also digging the writing. Due to their parent-less upbringing, Jen and Tristan have some issues and have earned a reputation around town as known troublemakers. Their “us against the world” attitudes could have easily been grating, but I find them endearing so far. Their conversations with other characters, especially the gobbons, have been lighthearted, goofy, and fun. When they’re not ripping on the world or each other, they’re pondering relatable issues like whether they feel comfortable calling the scientist their “dad.” The grander story about the relationship between the human world and the goblin realm has also kept my interest.

As a brawler, you’re mashing light and heavy attacks that feel quite good to execute, thanks to the satisfying weight behind them. That doesn’t mean it’s deliberate. Action is fast-paced, fluid, and combo-friendly, but you also have to manage to dodge thanks to a stamina bar. The twins are equipped with a shield used to block and parry attacks, the latter of which opens up foes for a counterattack or, better yet, to be picked up and tossed into their allies. Young Souls’ combat isn’t breaking any new ground, but it’s well designed and very fun. Smaller grunts and large bosses can be tougher than you’d expect, and that keeps the game from feeling too mindless as you have to stay on point in regards to knowing when to attack, defend, or tag out. Yes, there are times when enemies aren’t lined up with your attacks in that beat ‘em up sort of way, but that’s a legacy issue that I, as a fan of the genre, can tolerate.  So far, Young Souls plays like a dream is shaping up to be one of my favorite brawlers in recent memory.

The game supports two players, but I’m playing alone and still having a good time. You can swap between each twin on the fly in solo play, effectively giving you two health bars. The partner that’s tagged out gradually recovers health, and when a twin goes down, you can revive that sibling using the other. Jen and Tristan each have a limited number of lives, so it’s important to keep an eye on their health and implement constant tags during hectic situations. 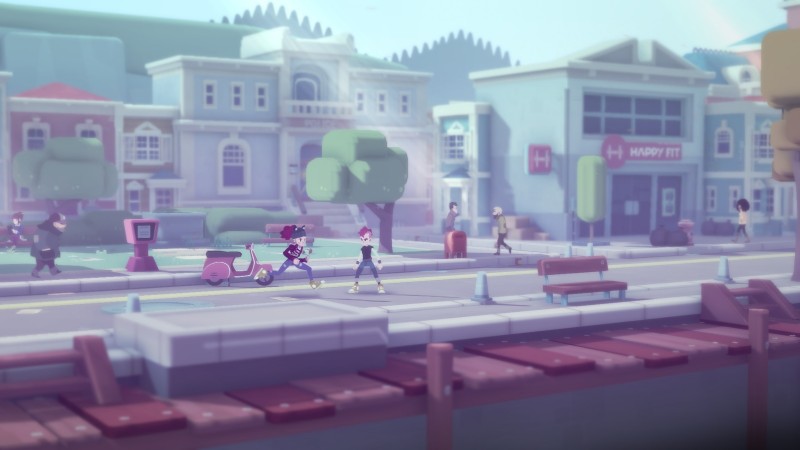 Jen and Tristan perform identically, but you can differentiate them by upgrading their stats and equipping armor and weapons. In between nightly dungeon runs, you’ll spend the day exploring the town to buy swanky outfits, selling trinkets for cash, and upgrading your base attributes by hitting the gym (provided you have a special token). Completing simple exercise mini-games like bench pressing or cycling can increase each twin’s strength, endurance, and stamina. If you’d rather have Jen be faster and Tristan be the heavy hitter, you can do that. Or you can upgrade them equally. Do what works for you!

I have a long way to go, and the game could always take a nosedive, but I can confidently say that, right now, Young Souls is well worth a look. Thanks to its tight gameplay, sharp writing, and eye-catching presentation, it’s much more than your standard beat ’em up. While its timed exclusivity is a good get for Stadia, it presents an unfortunate dilemma. Most people will likely pass on the game simply because Stadia is, well, Stadia. When it does come to PlayStation 4, Xbox One, Switch, and PC sometime this fall, it may get lost in the shuffle of the big holiday releases. Right now is the perfect time for something like this to drop, which makes it frustrating that it’s on a platform many people seem, at best, apathetic to (and understandably so). So if you’re a Stadia user or willing to give it a shot, so far, Young Souls has been one of the best reasons to fire it up in a long time.

Ally Is Investing $30 Million To Help Black Founders And Businesses

Health Benefits of Sumac (+ Creative Ways to Use It)