Architecture firm ZITA has used blackened wood and prefabricated structural elements to create a cabin in the Colombian highlands that was built entirely by hand.

The project, called House in the Andean Moorland, is located on a verdant, hilly site that sits 3,250 metres above sea level. The area features a “cloud landscape” that alters one’s depth of view, and constantly hides and reveals the surrounding mountain peaks.

Designed by Bogotá-based ZITA – or Zona Industrial Taller de Arquitectura – the dwelling was built following three years of research carried out with professor Cristina Albornoz. The project is intended to demonstrate how to create an environmentally sensitive home “within this fragile ecosystem,” the team said.

The client is a couple with two children. Both of the parents are environmental economists, and they purchased the property because it is part of a nature preserve that they intend to care for and expand. They use the house as a weekend retreat.

“The father was a devoted scout in his youth and sees the place as an opportunity to teach his kids about nature,” said architect Daniel Felman, founder of ZITA.

“The small portion where we built the house had been cut down decades ago by the previous owner, who lived off growing potatoes,” he added.

The new dwelling was constructed entirely by hand, therefore avoiding the need for heavy machinery. It was built using prefabricated elements, which helped reduce waste and construction time.

The 150-square-metre building consists of two offset bars that are connected by a glazed sunroom. Sloped roofs are intended to be in dialogue with the mountainous terrain.

Exterior walls are clad in cypress, which was charred to help boost resistance to humidity and insect infestations.

The dwelling is lifted off the ground via concrete stilts, helping minimise disturbances to the vegetation and water flows.

Atop the pillars are a series of  “porticos” that each consist of one beam and two columns. Together, these porticos form an assembly that resembles a ribcage.

This cage is tied together by walls and roofs made of oriented strand board (OSB). The system operates “as a structural diaphragm, making the house’s skin part of its structure,” the architects said.

The home was divided into two masses to reduce its scale and to provide multiple vistas of the landscape.

One side holds the main bedroom and bathroom, along with all social areas. The other side contains a pair of bedrooms and bathrooms. Walls and ceilings are clad in plywood, which helps lock in heat.

In the communal area, the team installed a steel screen with a hand-operated chain hoist. When opened up, the room extends outdoors and offers extensive views of the moorland.

The dwelling has a series of passive house strategies that help ensure thermal comfort – an important consideration given that temperatures at the site can oscillate between three and 14 degrees Celsius. 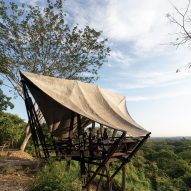 Getting sunlight into the home was a key strategy.

“The roof’s shape and location of wall openings allow all spaces in the house to have direct sunlight throughout the day, be it through the windows or skylights,” the architect said.

Certain parts of the house – such as the cement walls below the skylights and the glazed sunroom, which has a stone floor – absorb solar heat and release it at night.

The home also features a “five-layer system of thermal protection” for the walls, slabs and roofs. Lifting the building off the ground also contributes to internal comfort, as the floor slabs are kept dry.

The team added that water is generated on-site via vegetation capable of absorbing water, along with the “perpetual cloud forest condition”.

Other dwellings in Colombia include a timber-framed cabin by Santiago Pradilla that features a facade with a woven screen, and a 24-square-metre house designed by Alfonso Arango to serve as his weekend retreat.

Busy Mind Keeping You Up? How to Mindfully and Peacefully Drift Off to Sleep