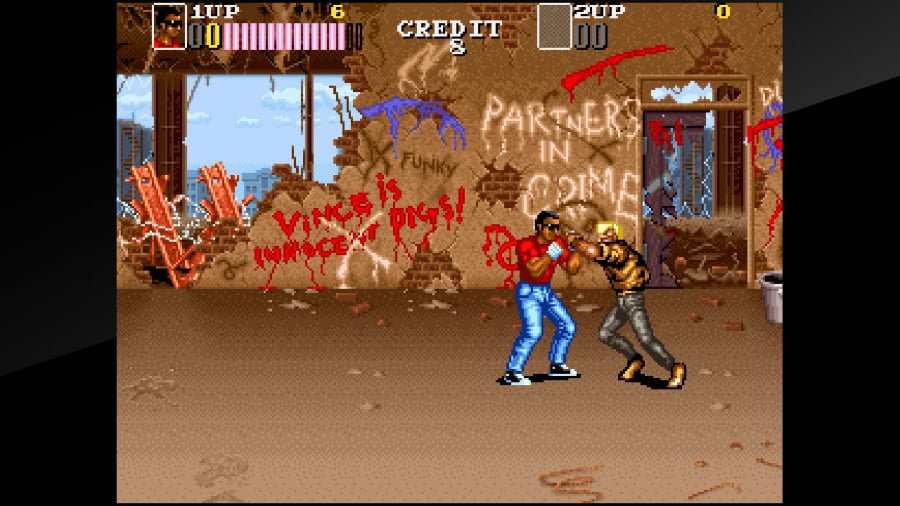 Back when belt-scrolling brawlers were the arcade genre of choice for millions of players worldwide, Capcom’s output was considered by many to be the gold standard. Titles like Final Fight and Alien Vs. Predator pulled in an astonishing amount of revenue during this period, but the company didn’t have the genre all to itself; Konami was one of several rivals who set out to challenge Capcom’s dominance.

When you discuss Konami beat ’em ups, then the likes of Teenage Mutant Ninja Turtles and Simpsons: The Arcade Game are obviously going to crop up, but when viewed without the assistance of rose-tinted spectacles, both of these games are actually quite simplistic in terms of gameplay mechanics. Vendetta (known in some parts of the world as Crime Fighters 2, linking it to Konami’s earlier side-scrolling fighter), on the other hand, is Konami’s attempt to genuinely inject some innovation into the genre, and it’s a much more accomplished offering than the company’s licenced efforts of the period.

While the storyline isn’t groundbreaking for the era – you have to set out to rescue a kidnapped woman from a gang – Vendetta introduces a few wrinkles which set it apart from other examples of the genre (some of which are evolved from the mechanics seen in Crime Fighters). Unlike Final Fight, you have a punch and a kick command, but no jump button – instead, you press both punch and kick simultaneously to execute a leaping attack which has a low arc and is perfect for crowd control. When your enemies are on the deck, pressing kick will execute a ground attack. Add in grapples, throws, weapons and the ability to lash out when you’re prone on the floor, and it quickly becomes obvious that Vendetta is quite a deep and nuanced game, even when working within the rigid confines of the belt-scrolling genre – and it’s possible to play it with three other people, too, which makes things even more engaging and enjoyable.

Like so many arcade games, Vendetta is mostly concerned with getting the player to feed in as many coins as possible during a single session, so there are moments when it becomes a little unfair. This isn’t a massive issue on a platform like the Switch, where unlimited continues are available, but unless you want to breeze through the game in a single sitting, you might want to limit the number of credits you use. Thankfully, even once you’ve finished it, Vendetta is appealing enough to encourage repeat play, especially if you’ve got a buddy (or three) nearby and willing to join in.

Visually, Vendetta is arguably Konami at its 2D coin-op zenith; the graphics are colourful, detailed and brilliantly animated, and the whole game is punctuated with humorous moments, such as when you hurl a bucket on an enemy’s head and they walk around blind, or when you get kicked in the family jewels and are momentarily incapacitated. Mercifully, the moustachioed, leather-clad enemies which dry-hump the player in the Japanese version haven’t made the transition from coin-op to Switch; this offensive stereotype was clearly less objectionable in the early ’90s than in 2021, and Hamster has taken the wise decision to exclude it here (however, it should be noted that the large-chested S&M dominatrix enemies remain in place).

If you’re a fan of belt-scrolling fighters then Vendetta is a must-buy, pure and simple. While its arcade origins do mean it’s slightly unbalanced in terms of fairness, it has enough charm, gameplay and multiplayer appeal to be well worth a look, even decades after its initial release.