Mexican architecture firm Estudio IPA has completed a house on an abandoned lot in San Miguel de Allende with calming interiors that make the most of a “narrow and uneven” property.

The project was completed earlier this year and is located near the city’s historic centre, an area that is well-known for its Spanish colonial architecture.

“[The project] is an adaptation to a historic centre so beautiful that it is part of the context,” said the Estudio IPA founder Ian Pablo Amores.

Ian Pablo Amores, who founded his eponymous studio in 2021, designed a new house on a tight existing lot that would make the most of the limited footprint.

“The house intends to open up to the predominant views of the site and to the greatest amount of sunlight that it can capture as it is a very narrow and uneven property,” Amores told Dezeen.

From its unassuming front facade, visitors enter the home into a small courtyard, where there is just enough space to park two cars.

“[The project] responds to a spatial organization delimited by a terrain with a rugged topography and an old abandoned house,” said Amores.

There is also a tree that grows through the house and brings vegetation to each of the home’s two levels.

A narrow staircase leads to the second floor, where there are two bedrooms that share a landing that surrounds the branches of the tree.

The architect chose to locate the bedrooms on the intermediate level to provide the most privacy and to ensure the communal areas would receive the most sunlight one storey up.

The bedrooms are set back from the street and screened by plants that are placed on a beam running across the property.

Still, the sleeping areas enjoy some natural light. The primary bedroom at the back of the home is lit by a semi-circular light well, while the front room has a small balcony overlooking the street below.

The primary bathroom was finished in vibrant clay bricks on the walls and floors, which contrast the muted tones found throughout the rest of the property.

On the top floor of the house are the communal areas, which include an open-concept kitchen, living and dining room, a study, and terraces at the front and back of the 385-square-metre home. 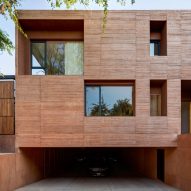 At the centre of the space, glass walls showcase the tree. This feature helps provide an informal separation between the sitting area and the dining table.

Antique furniture pieces and handmade decor objects are used throughout the interiors, lending the spaces a patinated and cozy feeling.

Estudio IPA is based in San Miguel de Allende, near the centre of Mexico. The young firm has also completed a boutique hotel made with pink walls that were chosen to evoke the history of Guanajuato.

Other residences in Mexico include a home by Rojkind Arquitectos that is shaped like a snake and a rural home topped with an oversized metal roof by Estudio Atemporal.

The photography is by Zaickz Moz.

My Favorite Herb Companions In The Kitchen 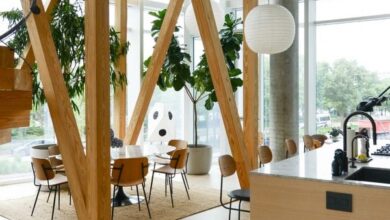