Architecture studio Foster + Partners has won planning permission for a pair of plant-covered high-rises, which will be the tallest buildings in the Beverly Hills neighbourhood of Los Angeles when they are complete.

Approval was granted by Beverly Hills City Council last month to develop the 17.5-acre site next to the Beverly Hilton and Waldorf Astoria Beverly Hills.

Foster + Partners has designed the masterplan for the One Beverly Hills development and Gensler will serve as executive architect. Alagem Capital Group and Cain International are the developers for the project.

It will contain a pair of residential towers containing condominiums, which will become the tallest buildings in Beverly Hills.

The plant-covered residential blocks will be built alongside a 10-storey building housing a 42-room hotel and 37 condominiums that will be offered under a shared home ownership scheme.

As part of the project, The Beverly Hilton will also be upgraded with a new arrival drive and lobby area along with upgrades to the ballroom.

The hotel’s swimming pool will be restyled and 36 new poolside cabana rooms added. A new conference centre will also be built.

Set next to the Los Angeles Country Club, the landscaping will appear to continue up the side of the residential towers’ planted balconies. 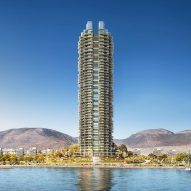 Los Angeles-based RIOS will design the landscape architecture for an eight-acre green space in the middle called the Botanic Gardens, half of which would be open to the public.

The garden will be planted with 40 trees and 250 plant species from around California, along with two miles of pathways wending past sculptures and water features.

“A century later, we have seized on this inspiration to create an organic architecture that merges with landscape, a large part of which is publicly accessible, creating a shared resource for the city,” he continued.

“The richness of Californian culture owes much to its diversity of influences, which comes together with the urgent need for sustainability – particularly conservation and recycling of water for the greenery.”

California is at risk of drought and water shortages, but the landscaping for One Beverly Hills will use an irrigation system that will run off collected rainwater and recycled greywater.

Along with the water system, a geothermal system will use the soil’s ground temperature to heat and cool the buildings and provide hot water. Onsite solar panels and a battery storage system will also be included in the development.

The studio is also developing a plant-covered skyscraper in Greece. The buildings are part of a growing trend to integrate greenery into high-rise buildings.

Heatherwick Studio recently completed a skyscraper in Singapore with balconies overflowing with plants, while Ingenhoven Architects created Europe’s largest green facade for an office in Düsseldorf.

The renderings are by DBox and courtesy of Foster + Partners.