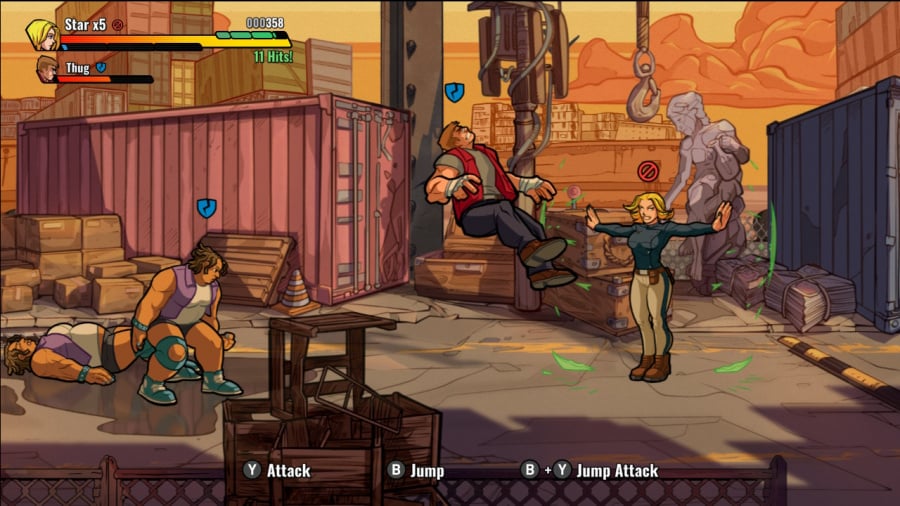 It may seem uncharitable to begin a review this way, but Mayhem Brawler is a terrible title for a game. It may as well be ‘Fast Driver’ or ‘High Jumper’. It honestly makes it sound like the laziest, perpetually 89p-in-an-eShop-sale shovelware rubbish. It also does the game a vast disservice, because Mayhem Brawler is a shockingly accomplished beat-‘em-up with much more to offer than its keep-on-scrolling moniker suggests.

This little belt-scroller is inspired by Streets of Rage 4 in the same way The Great Giana Sisters was “inspired by” Super Mario Bros. — that is to say the game bites its style big-time, but if you’re going to steal, you might as well steal from the best. So here’s Mayhem Brawler, with its vivid comic book-style graphics, hard-hitting moves and urban environment where the only activity that exists is PASTING.

Thankfully, then, the pasting is pretty darn good. Impacts are nice and crunchy, weapons and special moves are all present and correct, and the enemy designs show care and forethought. Besides being chunky and memorable, there’s a rather novel system at work where your opponent’s status is represented by an icon over their head – this way, you’ll always know if a knocked-down enemy will be executing a wake-up attack. Arguably this makes proceedings a little easier than they could be, but enemies have enough health, aggression and variety to remain a threat at all times. They’re pretty neat in general, a mixture of the usual sort of gangland heavies but with a frisson of supernatural monstrosity – lycanthropes (read: werewolves) and sorcerers are a common sight in this world.

And it’s a surprisingly interesting world to boot. Cutscenes are presented as a voiced comic book, with a running Twitter-esque feed to the right of the screen fleshing out the characters in an unobtrusive and clever manner. It’s very obvious that a lot of love and attention has gone into Mayhem Brawler’s writing and world, with the main characters’ chemistry coming across well and their banter playing out during each stage in an entertaining and breezy manner.

Speaking of main characters, all three are sufficiently enjoyable to play as, here. Trouble (grizzled all-rounder), Star (speedy superstar) and Dolphin (big ol’ bruiser) are each equipped with distinct move-sets. It’s more full-featured than you’d expect given the (presumably!) lower budget than the likes of Streets of Rage 4, with plentiful strategies and tech moves like the classic “landing on your feet” trick. Special Moves don’t cost health, here, instead being replenished by successfully attacking and damaging your foes, which means you’ll be less reticent to actually use them. You’ll need to, as well, because this game really isn’t easy — it’s not impossible, of course, but it is more challenging than you might expect. Helpfully (and unlike in SOR4), every character is able to run with a double-tap, but you may find some of the enemies a little too “tanky” with their large health bars.

Branching paths through the game lead to one of three different endings, and being able to choose which level you play next keeps things varied for multiple playthroughs. With only seven stages per game it won’t last you forever, but that’s a good thing with games like this where the fighting necessarily becomes more repetitive with time.

Mayhem Brawler is way, way better than it has any right to be. It looks good, plays nicely and only really suffers by comparison to its bigger brothers such as Fight’N Rage and Double Dragon Neon. The animation is lacking compared to these titles, but it’s still perfectly acceptable, and the slightly generic environments are too busy to really pay much attention to. With a world this interesting, we’d love to see another game take place in Mayhem Brawler’s universe.

Maybe give it a better name next time, though, eh?

Crypto, Congress and the Commission: What’s next for the ‘Wild West’?