Architecture practice Scott Whitby Studio has completed a renovation of the 19th-century Westminster Chapel in London, adding a public social space and upgrading its worship hall.

The chapel, which has been overhauled as part of a long-term revitalisation project, now features a large triple-tiered worship space with 1,500 seats, a cafe and a social area.

Prior to the renovation, the chapel was difficult to access and closed off from the public, only opening for Sunday services. Scott Whitby Studio‘s scheme allows the building to be open to the public throughout the week.

“When we first visited, the chapel appeared shut, and our main task was to make sure it felt open and accessible seven days a week,” founding director Alex Scott-Whitby told Dezeen.

Gold-coloured gates now mark the entrance to Westminster Chapel, with a filigree pattern informed by the design of the original church windows.

“The design of the chapel was all about opening it up to create a welcoming space for Londoners and visitors alike,” said Scott-Whitby.

“The gates fold away invisibly when not in use to open up a new public portico for the city,” he continued. “At night, the lighting design enables the gates when closed to offer a gift back to the city by creating a warm golden glow over the steps.”

After passing through the gates, visitors enter a portico under three arches. Beyond it is a room with terrazzo flooring that acts as a meeting, working, or dining space for the public.

The cafe sits to the side of this front area, separated from the chapel’s main hall by glazed timber partitions, which divide the interior without restricting views.

Scott Whitby Studio hopes this new space will be used for various activities while encouraging the public to engage with the building.

“The main engagement with the front of the building was when people would use the steps to stop and eat their lunch, often leaving their rubbish behind,” explained Scott-Whitby.

“We had to change this and so the first intervention was to improve the ‘front room’ so that it could be used by the congregation and hired for other activities during the week.”

Prior to the renovation, Westminster Chapel’s worship hall was dark and access was restricted by a series of long pews.

“The pews installed in the main space made it difficult for disabled members of the public to use the building and access was via a long, circuitous route,” the architect explained.

The studio transformed the large space into a 1,500-seat, three-tiered multipurpose room by replacing the pews with individual chairs and adding a new stage at the front of the space. 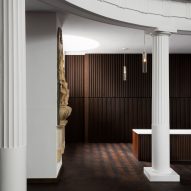 As part of the project, Scott Whitby Studio has also introduced new acoustic panelling and a cork floor to Westminster Chapel’s main hall, designed to enhance the sound quality of performances.

According to the studio, at 600 square metres, the cork floor is “believed to be one of the largest in Europe”.

Alongside the modern additions, the studio has highlighted the original features of the chapel, including the detailed vents and columns.

“We made sure to work around the original wrought iron columns inside the main hall, which are totally beautiful sculptural objects in their own right,” said Scott-Whitby.

“We also kept the Victorian hand-operated vents, which feature these delicate little handles in the shape of hands.”

The renovation is the first part of a larger six-phase effort to renovate Westminster Chapel over the coming years.

“The next stage will include removing an existing bottleneck to the rest of the building and creating lift access to the higher levels for the first time in the chapel’s history,” director Scott-Whitby added.

“The next phases will continue our quest to make a building that is light-filled, welcoming and accessible for generations to come,” Scott-Whitby concluded.

Other chapels recently featured on Dezeen include an inverted-pyramid chapel in Portugal and a sculptural white chapel on a China seafront.

The photography and video are by Jim Stephenson.