French shoe brand Nodaleto has chosen Miami as the location of its first US store, which New York studio Rafael de Cárdenas designed with sci-fi-influenced red and chrome interiors.

The shop opened in Miami Design District during the city’s art week earlier this month, starting a two-year lease in the 1,000-square-metre space (10,764 feet).

Rafael de Cárdenas based the interior on mid-century French design, as a homage to the influence this movement had on sets created for sci-fi movies.

The studio also linked the shape of Nodaleto‘s signature heels to chairs featured in Stanley Kubrick’s film 2001: A Space Odyssey.

“The design, driven by the concept of ‘hyper-modern hospitality’, explores shapes and materials that echo the feel of a space station as well as an idea of a glamorous future,” said the Rafael de Cárdenas team.

“In many ways, midcentury French design defined the frontier of space as much as NASA; the interior reflects that.”

Sci-fi references can be seen across the store, which is fully carpeted in bright red and features brushed chrome panels divided by thin light strips along its walls.

Shoe displays run the length of the narrow space, with white shelves suspended in front of the metallic panels.

Through the middle are a series of sculptural, undulating modular seats for shoppers to sit and try on the footwear. 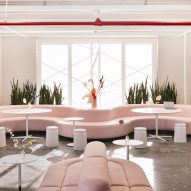 A large red volume right at the centre is emblazoned with the brand’s backlit logo, as well as three pairs of white mannequin legs that emerge from the vertical surface.

“The store serves as a moldable creative field for the brand and strives to offer an intimate immersion into Nodaleto’s mischievous personality,” said the studio.

Rafael de Cárdenas was shortlisted for interior design studio of the year at the Dezeen Awards 2022. Named after its founder, the studio’s previous projects include a bar inside New York’s Nordstrom department store and the Manhattan offices of beauty brand Glossier.

Miami Design District is home to the stores of many luxury brands, with architecture and interiors by internationally renowned studios, including Louis Vuitton’s menswear store wrapped in a diamond-patterned facade by Marcel Wanders.

The city, seen by some as the capital of Latin America, received an influx of creative talent during the Covid-19 pandemic and continues to grow as a cultural destination.

“Nodaleto chooses Miami because it’s a crossroad of cultures, a city permanently kissed by the sun, a hub for arts and design, because of its daring nerve and unapologetic energy,” said the studio.

The photography is by Kris Tamburello.

Reunited: The Ukrainian couple who married near the front line